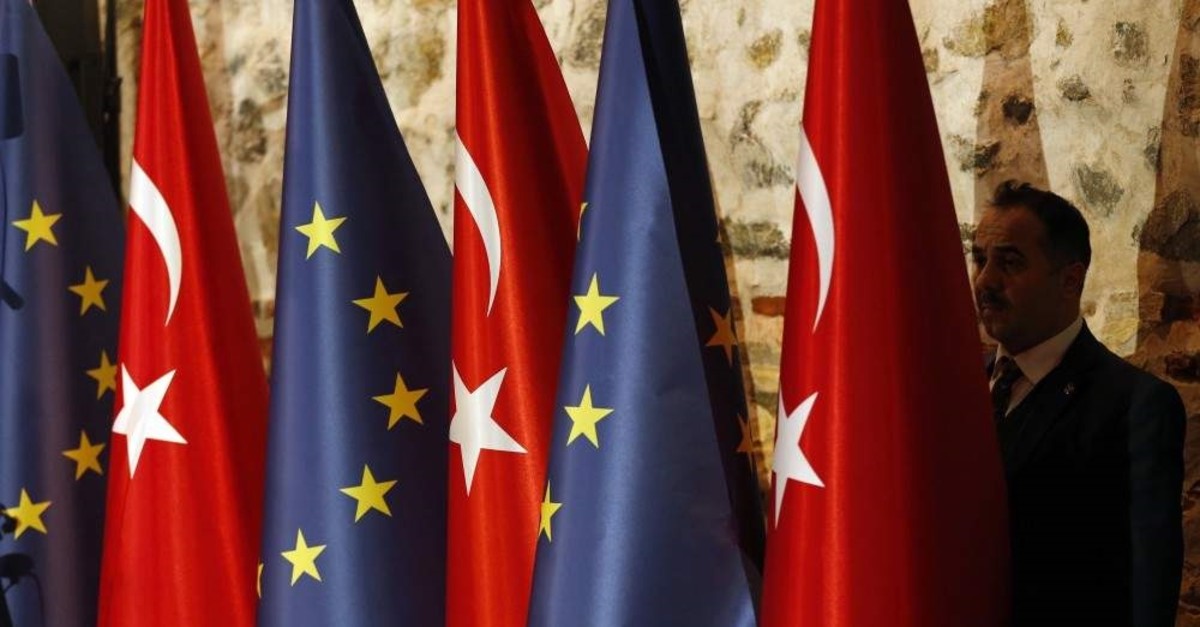 The Turkish and EU flag at the opening session of a high-level meeting to improve economic and business ties between the EU and Turkey in Istanbul, Feb. 28, 2019. (AP Photo)
by Ayşe Betül Bal Dec 13, 2019 2:02 am

Ever-changing world politics in which geopolitical advantages have gained new momentum are pushing the EU to find a way to handle disagreements and the overshadowing mutual distrust between the bloc and Turkey, experts say, highlighting Turkey’s crucial role with its strategic location.

Valeria Giannotta, an academic expert in Turkish politics and international relations, told Daily Sabah that in the current international system, Turkey emerges as a pivot state thanks to its ties with global actors, adding that the country plays the role of an international hub since it entangles several geographical areas, even those far from each other, both geographically and culturally.

“Nowadays, Ankara can look and weave positive relations in Asia, the Gulf and the Middle East, Africa and the West with the same intensity and interest. This rhythmic diplomacy makes Turkey a bridgehead and an indispensable partner for and between global players,” Giannotta said.

Turkey’s foreign policy has been evolving in parallel with changing world politics. Ankara has established new initiatives that will enable it to enhance cooperation with several parts of the globe, from Asia to Europe and Africa to Latin America, in various realms and on various levels. Rather than entirely depending on the West, the country is trying to balance the relationship between the East and the West.

Speaking to Daily Sabah, İsmail Ermağan, an associate professor at Istanbul Medeniyet University, said, “Turkey increases its influence in a balanced manner on both the Eurasian axis and regarding NATO,” explaining that German Chancellor Angela Merkel has seen the importance of this role, unlike President Emmanuel Macron in France who came to the fore with his anti-Turkey remarks.

Although diverse ideologies dominate the relationship between the EU and rising powers on the West-East axis, namely Russia and China, the economies are tied to each other in several aspects which surpass the security concerns and political discourses that, in Russia’s case, for instance, see emerging disputes in Eastern European countries and the Baltics.

Furthermore, changing the geopolitics of energy after the U.S.’ entrance into energy exports that challenge Russia has added new dimensions to EU’s energy politics as some of the countries within the bloc are overly dependent on Russian gas. Established in this regard, the Nord Stream pipeline project is expected to transport Russian gas to the European market by encompassing Turkey en route to Greece. Germany, which has a firm stance in the bloc is a major client of Russia’s project.

Europe has interests in developing economic and political relations with Asia as well, namely China, which according to Gionnatto is based on reciprocity, and strong cooperation with Turkey is an advantage in this regard.

She underlined that strong cooperation from the very beginning strengthens Europe’s hand against China’s expansionism along with the Belt and Road initiative, as Turkey can play a faciliatory role between the East and the West.

From the very beginning of its reform and opening-up policies, China has successfully set foot in the international arena with its growing economy and technology, along with gaining acceleration in trade. Being one of the most important initiatives for Beijing, China in 2013 launched the modern Silk Road project, called the Belt and Road Initiative (BRI), which looks to connect Asia, Africa and Europe with billions of dollars’ worth of infrastructural investment projects. Turkey is not only one of the first countries that supported the project but also a critical transit country. Ankara has been providing the basis for several important projects, such as the Trans-Adriatic Pipeline (TAP) and Trans-Anatolian Pipeline (TANAP), thanks to its geopolitical advantages.

“Turkey’s energy networks and sources are indispensable for supply security. Moreover, by strengthening the collaboration we may have a more secure Europe as Turkey is a southern gateway in challenging some main threats such as foreign fighters and the flow of refugees,” Giannotta said, adding that Turkey, which provided help to refugees long before the March 2016 refugee deal with the EU, is, indeed, one of the biggest humanitarian donors and key policymakers for Syrian refugees.

The refugee problem was one of several policy issues that most of the parties within the EU had it common, along with, most importantly, positive approaches toward Turkey, despite unfulfilled promises. In October, when Turkey launched its third cross-border anti-terror operation in Syria to eliminate the terror threat along its borders and provide a safe zone for the voluntary return of refugees, Gergely Gulyas, the Hungarian prime minister's chief of staff, said that the operation in northern Syria should be supported, provided that the country aims to facilitate the safe return of the nearly 4 million Syrian refugees it is hosting. Germany has also put forward the importance of a safe zone in Syria which Turkey had suggested long before the March 2016 migration deal with the EU.

Giannotta expressed that there is, of course, mutual disappointment overshadowing EU-Turkey relations, which have become more evident with several recent developments such as EU sanctions imposed on Turkey after the country’s counterterrorism operation that targeted terrorist entities in neighboring Syria, along with some EU statements following the July 15, 2016 failed coup attempt in Turkey.

Turkish officials have indeed criticized the EU on a number of issues, including a lack of solidarity following the deadly 2016 Gülenist Terror Group (FETÖ)-led coup attempt, the bloc's indifference to Turkey's anti-terrorism operations, the lack of outside assistance on the migration issue and the bloc's failure to adhere to its own agreements.

However, Gionatto said what is important is that bilateral relations remain above any of the political narratives.

“Turkey and Europe have proved to be capable of forgoing short-term interests for their further well-being,” she noted, giving trade as an example of successful cooperation between Brussels and Ankara, which she said not only increases wealth but also cooperation along with promoting global stability.

The economic relations worth billions of dollars between Turkey and the EU continued to grow with substantial continuity despite political disagreements in 2018, she noted.

Giannotta asserted that despite their opposition to Turkey’s EU full membership, countries like Germany, England and France, “are still in the top-10 of the main economic partners.” She underlined the fact that the customs union between Turkey and Europe also needs to be updated, as it still excludes some sectors such as services and agriculture which contribute a high percentage of Turkey’s GDP.

Wolfgang Wessels, director of the Turkey and European Union Studies Center at the University of Cologne, highlighted the importance of working on issues that find any middle ground between Brussels and Ankara, such as formulating meetings on the highest levels and establishing working programs, rather than focusing on the divisive subjects.

The visa liberalization process is yet another controversial and unsolved issue between Turkey and the EU that could be a step toward strengthening relations.

“We should not neglect that Turkey is the only candidate state who does not enjoy a visa liberalization regime with the EU. The paradox is that Turkish entrepreneurs encounter constant difficulties in accessing countries that are the primary destination of their exports,” Giannotta said, adding, “Turkey’s accession process will remain frozen, but in order to eliminate the asymmetrical relations between Brussels and Ankara, the EU should focus more on resolving disputes and controversies, and make moves to refresh mutual trust.”

Turkey applied for EU membership in 1987 and became a candidate country in 1999, with accession talks beginning in 2005. But negotiations stalled in 2007 due to objections of the Greek Cypriot administration on the divided island of Cyprus as well as opposition from Germany and France.

Speaking of the EU Council’s new strategic agenda for 2019-2024 to examine the details that further prevent complete cooperation between the bloc and Turkey, Wessels stated that EU has been prioritizing the protection of the European way of life, mentioned as “promoting the European way of life in the new agenda,” which he saw as an obstacle, except on things like promoting the rule of law, that excludes the cultural differences both between the bloc members and in its relations with other partners in a pluralistic world.

Experts further noted that not being able to establish a common foreign policy within the EU is yet another issue that prevents Brussels from taking a firm step on several issues such as the Syrian crisis. The EU, lacking a common stance for dealing with the migration crisis, a global crisis that eventually affected the bloc, failed from the very beginning of the flow of refugees from war-torn Syria. Turkey, on the other hand, has been continuingly asking European countries to support Ankara on the refugee crisis, a burden that Turkey has long been bearing alone.

The EU is always complaining about the Syrian issue, yet they don’t offer alternatives, Wessels said, adding that Brussels does not want to leave its comfort zone.

Also underlining the lack of a common foreign policy, Giannotta said: “EU common foreign policy was one of the pillars of the Maastricht agreement and, despite some changes and reforms, so far there have not been big achievements and developments. This represents one of the weak points of the EU as a political project, therefore, in the light of the current internal challenges as the discrepancies make it still very difficult to develop a consistent foreign policy.”

Brexit is yet another source of uncertainty for Brussels that not only emerged as an existential crisis for the EU but as greater economic obscurity, in addition to the rising far-right politics. All in all, diversity in both politics and on the ground may be much greater and deeper than the West has been acknowledging.