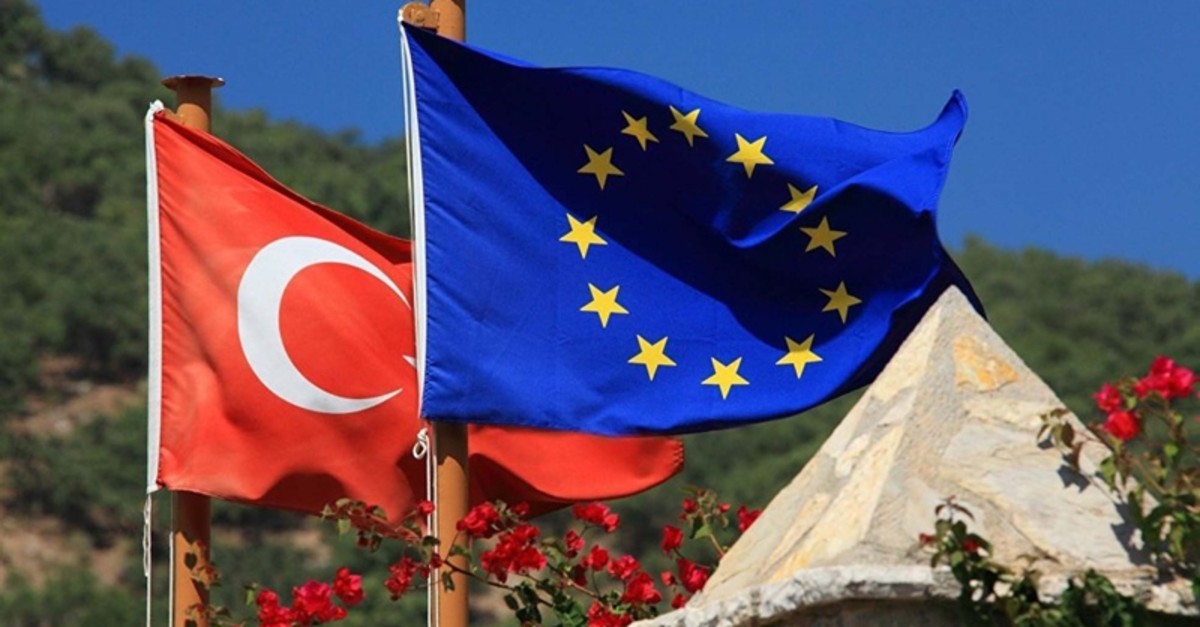 | File Photo
by Daily Sabah Dec 17, 2019 5:21 pm
Ankara looks forward to starting a new chapter in its relations with the European Union, said Deputy Minister of Foreign Affairs and Director for EU Affairs Faruk Kaymakçı on Tuesday.
“In 2020, we have an opportunity to open a new page in Turkey-EU relations. We want it sincerely,” he said and added that they also expect a similar positive attitude from the EU.
Evaluating bilateral relations in 2019 and along with future expectations until 2024, when the tenure of the current EU Parliament ends, Kaymakçı touched upon several issues affecting the bloc and its relations with Turkey.
One of these issues was Brexit. Speaking of the U.K.’s decision to leave the EU in 2016, Kaymakçı said that the leaving process is still going on.
“When we look at 2019, one of the most important issues was that the Brexit process started in 2016 and has not reached a result yet,” he explained.
Kaymakçı also added that the U.K. has never become a full member of the bloc, because it never joined the Schengen, never adopted the common monetary policy or common security and foreign policies.
“The U.K. has always been a deal-breaker for the EU since the beginning. Its leaving will not be a surprise. But, there is still a possibility that Brexit may not happen,” he said.
Evaluating the Brexit process from Turkey’s perspective, Kaymakçı said, “How Brexit will happen is important for us. If the U.K. establishes a relationship under the customs union after it leaves the EU, then we will need a new model of trade relations with the U.K. Otherwise, we may face problems in many sectors. Turkey is attached to the EU with a partnership relation. Our citizens living in the U.K. have some rights due to our partnership deals. If the Brexit happens, these rights will be lost or not valid. So we maintain our negotiations.”
In the Brexit referendum campaign, the group campaigning to leave the EU used anti-Turkish slogans to win xenophobic votes. The "leave" campaign absurdly argued that if the U.K. remained a member state and in the case of Turkey's membership in the bloc, "80 million Turks would come to the U.K." It was a misleading slogan that went unchallenged by the campaign and advertisement watchdogs in the U.K.
Turkey is the only non-EU country that has had a customs union agreement with the union, which was inked in 1966. In its Dec. 21, 2016 assessment, the EU Commission proposed a redrawing of the current deal, which only covers a limited range of industrial products and excludes agriculture, public procurement and services.
Kaymakçı also underlined the rise of populism and the far-right across the EU. “This is a situation that makes enlargement in the EU difficult for us. We face a situation that sees some biases against both Islam and Turkish society revive.”
Stating that the unilateralism is also on the rise across the western world, Kaymakçı stressed the U.S. and Donald Trump’s roles in the rise of unilateralism across the world.
Far-right political parties and groups are known for their hostility toward migration, multiculturalism and European integration. They are also hard opponents of Turkey's possible EU membership. Many believe that Turkey's membership application has been stalled for years due to its cultural and religious identity. During the period since Turkey applied for full membership, many countries from Eastern Europe with major democratic flaws have been accepted into the union. Also, the recent "democratic recession" in many EU member countries triggers questions about the union's principles and values.
Stating that Turkey fulfilled 66 of the 72 necessary criteria to be an EU member, Kaymakçı said, “Our aim is to adopt the remaining six criteria in a package.”
He also said that efforts to fully implement the readmission agreement continue.
Ankara and Brussels signed an agreement in 2016 to find a solution for the influx of refugees heading to the EU. According to the deal, Turkey was promised a total of 6 billion euros ($6.6 billion) in financial aid, which was initially designed to be given to the country in two stages and be used by the Turkish government to finance projects for Syrian refugees. Visa freedom for Turkish citizens was also promised to be provided under the agreement.
The customs union was also to be updated in accordance with the deal. In exchange for these promises of the EU, Turkey took the responsibility of discouraging irregular migration through the Aegean Sea by taking stricter measures against human traffickers and improving the conditions of more than 3 million Syrians living in Turkey.
Despite significant developments in the control of migration traffic, the EU could not deliver on its commitments stated in the deal.
Turkey applied for EU membership in 1987 and became a candidate country in 1999, with accession talks beginning in 2005. But negotiations stalled in 2007 due to objections of the Greek Cypriot administration on the divided island of Cyprus as well as opposition from Germany and France.
Last Update: Dec 20, 2019 2:28 am
RELATED TOPICS