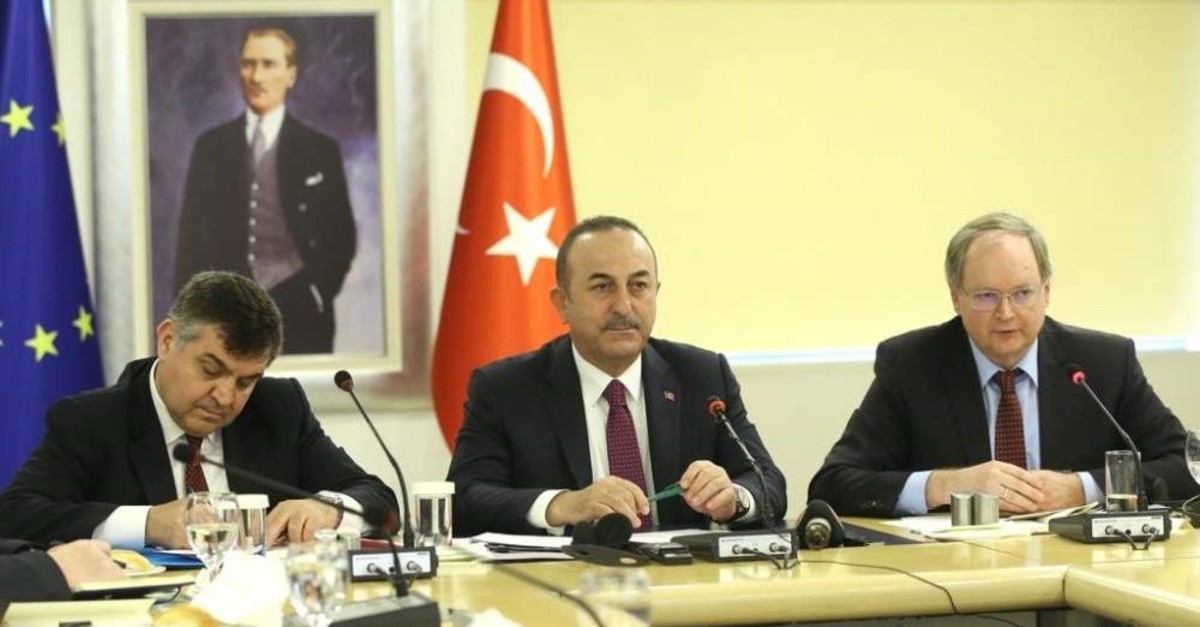 by Daily Sabah Feb 05, 2020 5:22 pm
Foreign Minister Mevlüt Çavuşoğlu said yesterday it is time to usher in a new era with the European Union in Turkey's nearly half-a-century-long accession talks, calling on the bloc to review its decision to suspend high-level meetings between the two sides.

"We see a constructive approach of EU's term president Croatia on this issue," Çavuşoğlu said in a meeting with EU ambassadors, adding that anti-Turkey rhetoric among the bloc is recognized not only by the Turkish government but also by the Turkish people. "Unfortunately, distrust between the two sides is growing deeper," he stressed.

Last year, the European council suspended negotiations on the Comprehensive Air Transport Agreement and agreed not to hold the Association Council and further meetings of the EU-Turkey high-level dialogues with the reason of "Turkey's continued and new illegal drilling activities."

Çavuşoğlu added that he sent a letter to the EU High Representative for Foreign Affairs and Security Policy, Josep Borrell, which explains Ankara's vision on the accession talks.

Signing a partnership agreement with the European Economic Community (EEC) in 1963, Turkey applied for EU membership in 1987 and accession talks began in 2005. But negotiations stalled in 2007 due to objections of the Greek Cypriot administration on the divided island of Cyprus.

Stressing the growing racism among member states that "undermines" the EU, Çavuşoğlu called on the bloc to take joint steps against the problem.

"You saw the recent upsetting incident in the European Parliament. We are happy for the attitude of the EP and Greek government but we should understand that racism started to shake the roots of EU values and we need to take joint precautions against this," he said.

Çavuşoğlu referred to the far-right Greek member of the European Parliament Ioannis Lagos' ripping of the Turkish flag during the plenary debate on migrants last week.

"On the one hand, there is Turkey, which is doing whatever it wants to do," Lagos said, ripping a piece of paper with the Turkish flag printed on it. He said that they need to put an end to the migrant flow.

Çavuşoğlu also criticized the Belgian court's ruling to prevent an investigation into PKK terrorists with the reason that they are not participating in terrorist activities against Belgium but against Turkey.

"This is creating such a distinction of 'our terrorist and your terrorist.' But what we need is a joint fight against all kinds of terrorism," the foreign minister stressed.

Late January, Belgian Federal Prosecutor's Office decided to ratify a ruling by the Belgian Chamber of Indictments to prevent an investigation into 36 terrorist PKK-linked suspects for disregarding the law.

The appeals court ruled that counterterrorism laws were not applicable to the suspects since they were not waging a war on Belgium, but rather Turkey.

"We should put an end to this hypocrisy," Çavuşoğlu added.

In its more than 30-year terror campaign against Turkey, the PKK, recognized as a terrorist group by Turkey, the U.S. and the EU, has been responsible for the deaths of some 40,000 people, including women and children.
RELATED TOPICS