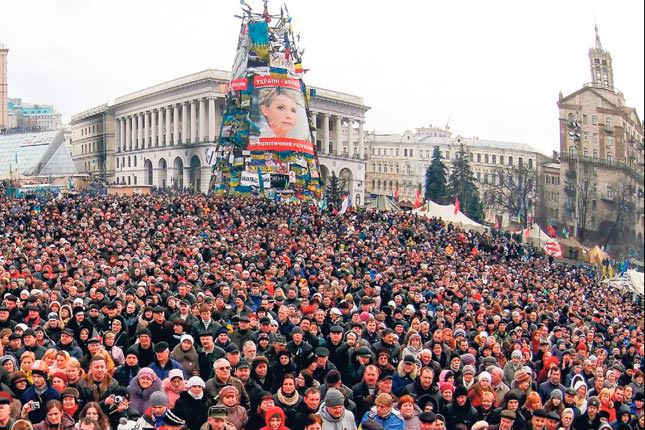 ousted Ukrainian President Ukraine's acting government issued a warrant for the arrest of Yanukovych, last seen in the pro-Russian Black Sea peninsula of Crimea, accusing him of mass crimes against protesters who stood up for months against his rule

Ousted president Viktor Yanukovich has been placed on Ukraine's wanted list for mass murder. Calls are mounting in the country to put Yanukovych on trial, after a tumultuous presidency in which he amassed powers, enriched his allies and cracked down on protesters. Anger boiled over last week after snipers attacked protesters in the bloodiest violence in Ukraine's post-Soviet history. The turmoil has turned this strategically located country of 46 million inside out over the past few days, raising fears that it could split apart. The parliament speaker is suddenly nominally in charge of a country whose economy is on the brink of default and whose loyalties are torn between Europe and longtime ruler Russia. Ukraine's acting interior minister, Arsen Avakhov, said on his official Facebook page Monday that a warrant has been issued for the arrest of Yanukovych and several other officials for the "mass killing of civilians." At least 82 people, primarily protesters, were killed in clashes in Kiev last week. Avakhov says Yanukovych arrived in Crimea on Sunday and relinquished his official security detail then drove off to an unknown location. After signing an agreement with the opposition to end a conflict that turned deadly, Yanukovych fled the capital for eastern Ukraine. Avakhov said he tried to fly out of Donetsk but was stopped, then went to Crimea.
Tensions have been mounting in Crimea, where pro-Russian protesters raised a Russian flag on a city hall in one town and scuffled with police. Russia maintains a big naval base in the Crimean port of Sevastopol that has tangled relations between the countries for two decades.

Yanukovych set off a wave of protests by shelving an agreement with the EU in November and turning toward Russia, and the movement quickly expanded its grievances to corruption, human rights abuses and calls for Yanukovych's resignation. "We must find Yanukovych and put him on trial," said protester Leonid Shovtak, a 50-year-old farmer from the western Ivano-Frankivsk region who came to Kiev's Independence Square to take part in the three-month protest movement. "All the criminals with him should be in prison."
The speaker of parliament assumed the president's powers Sunday, even though a presidential aide told the AP on Sunday that Yanukovych plans to stay in power.

The speaker, Oleksandr Turchinov, said top priorities include saving the economy and "returning to the path of European integration," according to news agencies. The latter phrase is certain to displease Moscow, which wants Ukraine to be part of a customs union that would rival the EU and bolster Russia's influence. Russia granted Ukraine a $15 billion bailout after Yanukovych backed away from the EU deal.

Meanwhile Ukraine's newly empowered parliament has voted to allow the release of former Prime Minister Yulia Tymoshenko after more than two years in prison.
Legislators voted 310-54 to decriminalize the count under which she was imprisoned, meaning that she is no longer guilty of a criminal offense.

Hours after her release from custody Tymoshenko addressed protesters in Kiev in the weekend. She says that the fight against President Viktor Yanukovych is not over. "Fight to the end" she told a tens of thousands strong crowd on Kiev's Independence Square. "We must bring Yanukovych and the scum that surrounds him to Maidan," she told the cheering crowd, using the square's Ukrainian name.