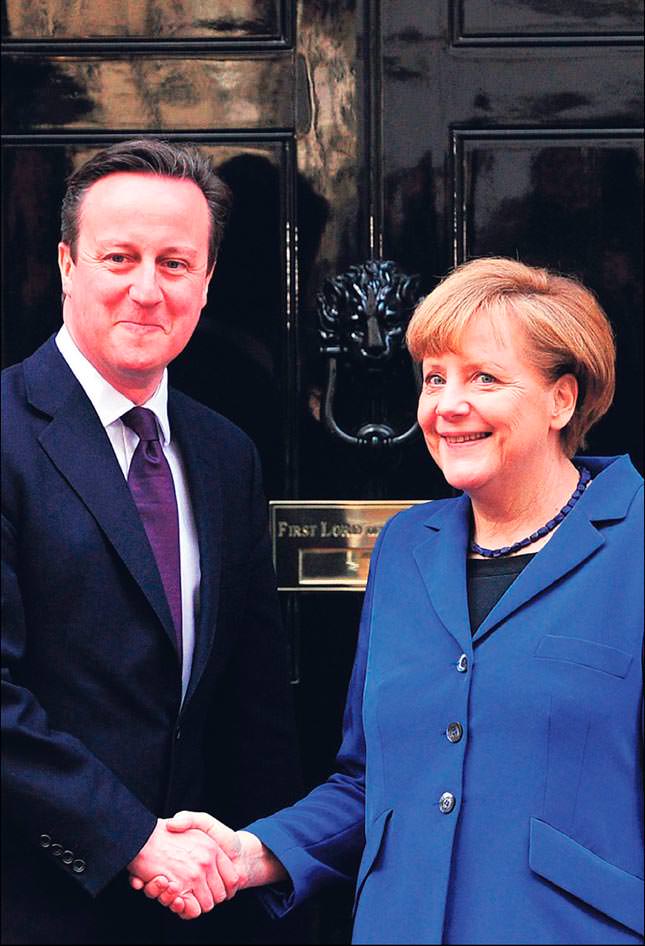 German Chancellor told the British parliament she was not prepared to promise fundamental reform of the EU for London's sake, but said the bloc did need some changes and that Britain should not leave it

In London for a one-day visit at a time when uncertainty about Britain's future in the EU is rising because of a promise by Prime Minister David Cameron to offer Britons an in/out membership referendum, German Chancellor Angela Merkel suggested she was ready to go some, but not all the way, to meeting some of Cameron's demands. "Some expect my speech to pave the way for a fundamental reform of the European architecture which will satisfy all kinds of alleged or actual British wishes. I am afraid they are in for a disappointment,"
Merkel said in English. "Others are expecting the exact opposite and they are hoping that I will deliver the clear and simple message here in London that the rest of Europe is not prepared to pay almost any price to keep Britain in the European Union. I am afraid these hopes will be dashed," she added.

Instead, Merkel indicated that she would back Cameron's desire to clamp down on abuse of the EU's freedom of movement rules when it came to welfare benefits, partially back his drive to rein in the European Commission, and that Britain would have a chance - along with everyone else - to submit proposals for reform when deeper integration of the euro zone happened. "We need a strong United Kingdom with a strong voice inside the European Union. If we have that we will be able to make the necessary changes for the benefit of all," said Merkel.

Under pressure from eurosceptics in his Conservative party and from the anti-EU UK Independence Party (UKIP) ahead of European elections in May and a national vote next year, Cameron has promised to try to reshape Britain's EU ties if re-elected and to give Britons an in/out membership referendum.

He hasn't spelt out all the reforms he wants, but has made it clear he wants to curb freedom of movement for poorer new EU member states, clamp down on pan-EU "welfare shopping", cut swathes of EU red tape, and improve competitiveness.

Merkel's visit is seen as a test of how far he is likely to get in persuading the rest of the bloc to sign up to those and other as yet unspecified reforms since Germany is the bloc's most powerful state and its biggest economy.

Cameron has so far garnered only limited backing for his reform plans among other EU states. British Foreign Secretary William Hague earlier this week described Germany as London's "most important partner" when it came to seeking EU reform and the lavish reception Merkel is getting reflects that. After her address to both houses of Britain's parliament, Merkel is due to have lunch with Cameron in his offices and then take tea with the Queen. That pomp and circumstance contrasts sharply with an Anglo-French summit last month when President Francois Hollande and Cameron held a news conference in an aircraft hangar before sharing a low-key pub lunch. Hollande poured cold water on the prospect of EU treaty reform saying it was not a French priority.

Britain's ties with Germany are warmer than those with France. Merkel and Cameron are both center-right politicians. Merkel has said repeatedly that she does favor EU treaty change. But she sees that as much more limited in scope than Cameron and primarily as a way of deepening euro zone integration. "Only through close, binding coordination of economic policy can we avoid, in the longer term, suffering another deep crisis in the euro area. For this I believe we need to adapt the legal foundations of the monetary union in a limited, targeted and speedy way to stabilize the union for the long term," Merkel said.

More broadly, her Christian Democrat party (CDU) wants a stronger EU political union, however, and she did not indicate that she would back Cameron's desire to give national parliaments a formal veto over European Commission proposals. With Cameron trailing the opposition Labor party in the polls ahead of next year's national election Merkel will also pay a visit to Ed Miliband, the Labor leader, on Thursday.