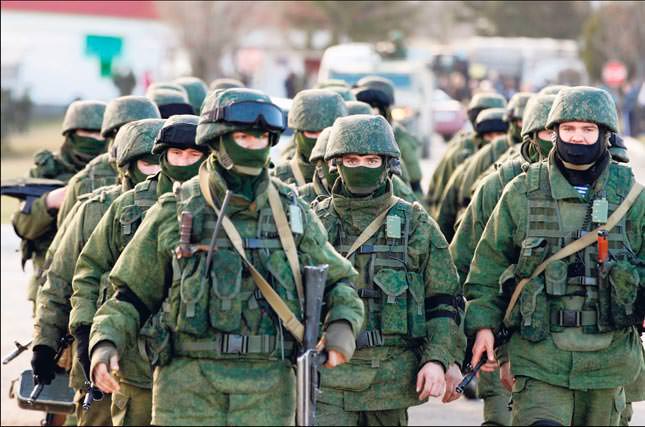 Russia's deployment of soldiers to the Crimean peninsula after a people's revolution in Kiev causes serious international backlash. Meanwhile, Foreign Minister Davutoğlu holds a summit in Ankara with intelligence and military officials to discuss Turkey's stance in the crisis.

Brussels (DPA) - "This is a question of defending our citizens and compatriots, and ensuring human rights, especially the right to life," Lavrov told the U.N.

Human Rights Council in Geneva, while drawing parallels between Ukrainian activists and rebels in Syria. "It is gravely important to disassociate ourselves from extremists who seek to illegally gain control over the situation, nurturing violence and open terror," he said. The Russian military took "complete operational control" of Crimea on Sunday, according to a senior U.S. official, who said the military presence included 6,000 airborne and naval forces, with reinforcements on the way.

Lavrov's comments came as the EU's foreign ministers gathered in Brussels for emergency talks expected to focus on a condemnation of Moscow's actions in Ukraine and demand that Russian forces withdraw from Crimea, according to EU diplomats.

Seven of the world's most industrialized nations also issued a joint condemnation of Russian troops entering Crimea, saying they would stop their involvement in preparations for a planned Group of Eight (G-8) summit in June in Sochi. "We, the leaders of Canada, France, Germany, Italy, Japan, the United Kingdom and the United States and the President of the European Council and President of the European Commission, join together today to condemn the Russian Federation's clear violation of the sovereignty and territorial integrity of Ukraine," the G-7 statement, released by the White House late Sunday, read.

Russia's actions "contravene the principles and values on which the G-7 and the G-8 operate," the statement continued, adding that the G-7 countries would suspend preparations to take part in the Sochi G-8 summit "until the environment comes back where the G-8 is able to have meaningful discussion." The communique came after U.S. President Barack Obama spoke by phone Sunday with German Chancellor Angela Merkel, U.K. Prime Minister David Cameron and Polish President Bronislaw Komorowski. The Russian parliament on Saturday approved a request from President Vladimir Putin to use armed force in Ukraine "until the social and political situation in that country is normalized."

The move came about one week after Viktor Yanukovych was ousted as Ukrainian president and a pro-Western opposition government came to power in Kiev, prompting Yanukovych to flee to Russia.

The Russian incursion in Crimea has brought Ukraine to "the brink of disaster," Interim Prime Minister Arseniy Yatsenyuk told reporters in Kiev. "This is not a threat. This is actually the declaration of war to my country," he said. U.K. Foreign Minister William Hague warned Moscow that it faced "significant costs" for its actions in Crimea. "If Russia continues on this course we have to be clear this is not an acceptable way to conduct international relations," he told BBC Radio. The North Atlantic Treaty Organization (NATO) and the Organization for Security and Cooperation in Europe (OSCE) convened emergency meetings in the wake of the Russian deployment in Crimea, amid mounting international pressure on the Kremlin.

The foreign minister, intelligence chief and military chiefs meet to discuss steps Turkey can take to defuse the crisis between Ukraine and Russia.

Foreign Minister Ahmet Davutoğlu, National Intelligence Agency (MİT) chief Hakan Fidan and top military officials met in Ankara yesterday to discuss the repercussions of the Russia military deployment in Crimea along with the rising tension between Russia and the West.
Ankara wants the crisis diffused with no change in Ukrainian sovereignty over Crimea. At the meeting that was held at the Foreign Ministry, officials studied the population statistics of Crimean Tatars, who have a large diaspora in Turkey, diplomatic processes to be followed in the near future, and Davutoğlu briefed the officials about his visit to Kiev.

Diplomatic sources said, claims that NATO would intervene in the crisis was not true. One official, who did not want to divulge his name, said Ukraine was not a member of the alliance and the two countries had yet to start an armed fight.

During his time in Ankara, Davutoğlu also met with Turkish President Abdullah Gül at the Çankaya Palace to discuss the latest developments in Ukraine and Crimea. Davutoğlu also made telephone calls to nine foreign ministers including European Union's Catherine Ashton.

Davutoğlu spoke to the foreign ministers of the U.S., U.K., France, Italy, Japan, Poland and Canada over the phone to share information on the ongoing conflict in Ukraine's Crimea, which is currently occupied by Russian and pro-Russia forces.

Davutoğlu made suggestions on how the tension in Crimea may be decreased. He also shared his personal impressions and recently received information during his official visit to Ukraine last week.