March 7: US President Barack Obama says a referendum to decide the fate of Crimea would not be legitimate under Ukraine's constitution.

March 6: Crimea's parliament votes to join Russia, will hold a referendum on 16 March.

March 5: Russia says it will retaliate for any U.S. sanctions over Ukraine.

March 4: Russian PM Vladimir Putin proclaims that the Russian troops in Crimea are solely employed for self-defense purposes. Russian forces have circulated the Belbek airbase.
March 3: Ukraine says there are as many as 16,000 Russian troops in Crimea. Russia says the troops were deployed at the request of Yanukovych. The main Russian stock index falls 12 percent; Russia's central bank raises its main interest rate 1.5 percentage points.

March 2: Ukraine appeals for international help, fearing a wider Russian invasion. Supporters on both sides take to the streets of Ukrainian cities and of Moscow. The Group of Seven suspends preparations for June's G-8 summit in Russia.

March 1: Russian troops take over Crimea without firing a shot. The Kiev government and its Western supporters are powerless to react. U.S. President Barack Obama calls Putin to demand the troops' withdrawal. 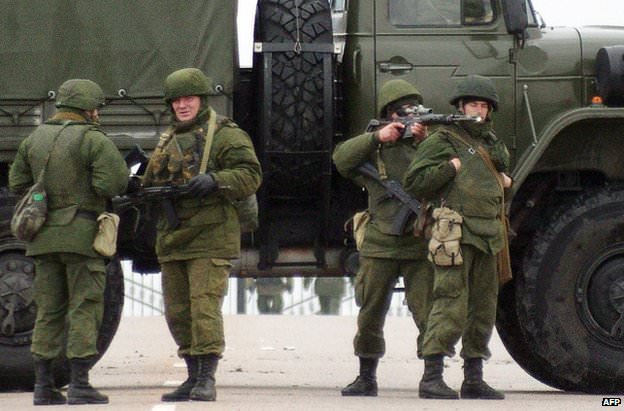 Feb. 28: Ukraine says Russian troops have taken up positions around strategic locations on the Crimean peninsula. Ukraine's parliament adopts a resolution demanding that Russia halt steps it says are aimed against Ukraine's sovereignty and territorial integrity. Turchynov says he has put armed forces on full readiness because of the threat of "potential aggression."

Feb. 23: Ukraine's parliament assigns presidential powers to its new speaker, Oleksandr Turchinov, an ally of Tymoshenko. The new authorities ask the West for loans to avoid an imminent default. Pro-Russia protesters start rallying against the new authorities in Crimea, where Russia has a major naval base.

Feb. 22: Parliament votes to remove Yanukovych and hold new elections. Tymoshenko is freed and addresses tens of thousands on the Maidan.

Feb. 21: Under a European-mediated plan, protest leaders and Yanukovych agree to form a new government and hold an early election. Parliament slashes his powers and votes to free his rival, Yulia Tymoshenko, from prison. Yanukovych flees Kiev after protesters take control.

Feb. 20: Hours after a truce is announced, violence resumes, with government snipers shooting protesters from the roofs. Most of the 82 deaths occur on this day.

Feb. 18: Protesters attack police lines and set fires outside parliament after it stalls on a constitutional reform to limit presidential powers. Riot police respond to the violence by trying to push protesters off ındependence Square. At least 26 people die and hundreds are injured.

Feb. 16: Opposition activists end their occupation of Kiev City Hall in exchange for the release of all 234 jailed protesters. 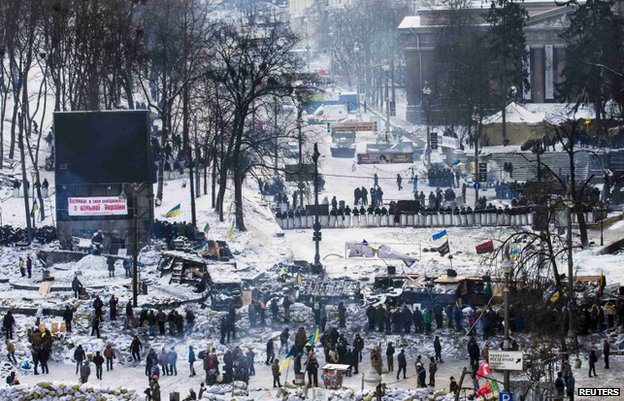 Jan. 28: In concessions to the opposition, the prime minister resigns and parliament repeals harsh anti-protest laws that set off the violence.

Jan. 22: Three protesters die during a confrontation between police and demonstrators manning barricades.

Dec. 1: A protest attracts around 300,000 people on Kiev's ındependence Square, known as the Maidan, the largest since the 2004 Orange Revolution. Activists seize Kiev City Hall.

Nov. 21, 2013: President Viktor Yanukovych's government announces it is abandoning an agreement to strengthen ties with the European Union and is instead seeking closer cooperation with Moscow. Protesters take to the streets. 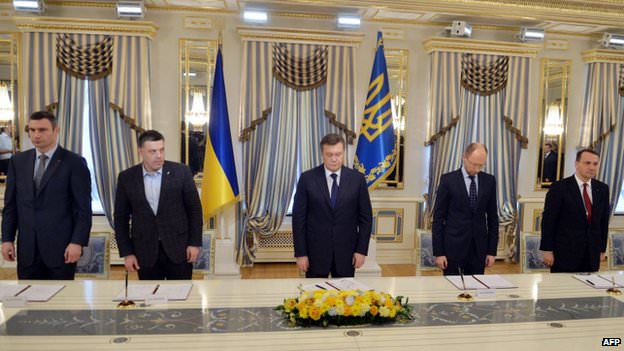