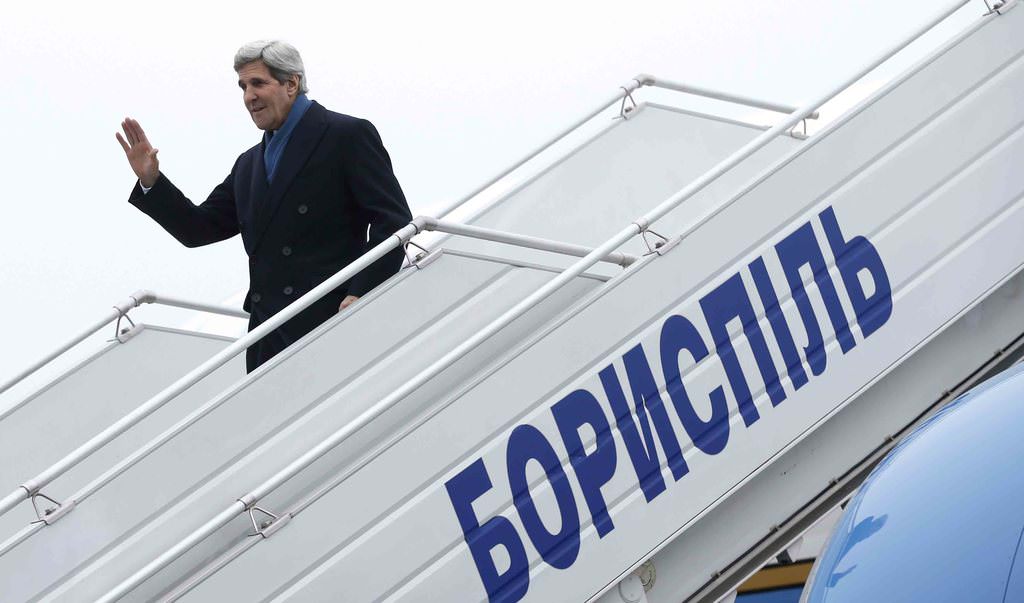 March 8, 16:26 (AFP) - Dozens of computer networks in Ukraine have been infected by an aggressive new cyber weapon called Snake.

14:11 (AFP) - Russia is considering halting foreign inspections of its strategic weapons arsenal, including nuclear-capable missiles, in response to "threats" from the West over the Ukraine crisis, the defence ministry says.


11:16 (AFP) - Any sanctions imposed by the United States on Russia over the turmoil in Ukraine could "boomerang" on Washington, the Kremlin warned Saturday.

10:07 (Reuters) - Ukraine's border guards said on Saturday some of their men had been evicted from an outpost in eastern Crimea by Russian soldiers, who seized their apartments and forced them out in the middle of the night with their families. 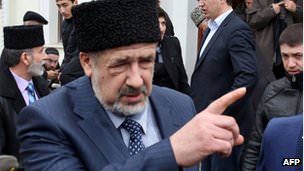 17:09(AFP) - The International Monetary Fund (IMF) says it is "impressed" with the Ukrainian interim government's commitment to the reforms required in exchange for aid.

16:35 - Reports say that Russias gas company Gazprom is threatening Ukraine with cutting its gas exports if it doesnt pay off its $1.89 bn debt.

15:52 (AP) - In a surprising move after Russia flexed its military might in the Crimean Peninsula, Ukraine's new leadership has reached out to oligarchs for help appointing them as governors in eastern regions where loyalties to Moscow are strong.

14:44 (AFP) - Military observers who were blocked from entering Crimea by land will make a second attempt to enter shortly.

14:41 - A Ukrainian commercial TV channel is reporting a new deal from the Russian military to Ukrainian troops in Crimea.

14:07 (AP) - Valentina Matvienko met with the head of the Crimean parliament to discuss the region's possible accession to Russia.

21:00 - US President Barack Obama says a referendum to decide the fate of Crimea would not be legitimate under Ukraine's constitution.

20:01 (AFP) - EU leaders agreed Thursday to sign an association accord with Ukraine before the ex-Soviet state holds elections in May, European Union president Herman Van Rompuy said after an emergency summit on the crisis.

March 6 ,09:11 (AP) - The new leader of Ukraine's Crimea region says pro-Russian forces control all access to the strategic peninsula and have blockaded all Ukrainian military bases that have not yet surrendered.

21:55 Washington D.C (Reuters) - The Pentagon is more than doubling the number of fighter jets it is sending to a NATO air policing mission in the Baltics, as part of the US response to the Ukraine crisis.

21:14 Kiev (AP) - Ukraine's PM Arseniy Yatsenyuk: 'A number of military forces of the Russian Federation are deployed in Crimea. We cannot figure out the reason why Russian boots are on Ukrainian ground. And it's crystal clear that it was ordered personally by President Putin.'
18:46 Kiev (Reuters) - U.N. Deputy Secretary General Jan Eliasson said Robert Serry had been threatened but had not been kidnapped.
18:35 Kiev (Reuters) - Armed men stopped a special representative of U.N. Secretary General Ban Ki-moon in Ukraine's Crimea region on Wednesday, Ukraine's foreign ministry said.

11:35 (Reuters) - Ukraine on Wednesday raised its flag over the government headquarters in the eastern city of Donetsk where a Russian flag had stood since Saturday, witnesses said.

11:17 (Reuters) - Ukraine's foreign minister said on Wednesday he wanted to press for a peaceful solution to the conflict with Russia. On arrival in Paris for international talks on the conflict, Andrii Deshchytsia said: "We want to say a few things to the Russians. We want to keep good dialogue and good relations with the Russian people. We want to settle this conflict peacefully and we don't want to fight the Russians".
11:01 (Reuters) - Russian forces seized two Ukrainian missile defence battalions in the Crimea region on Wednesday, Interfax news agency quoted a military source as saying. The Ukrainian Defence Ministry was unable immediately to confirm on the report, which quoted the source saying: "We now expect the arrival of Russian missile specialists and pro-Russian activists who will have to persuade the Ukrainian military personnel to carry out joint combat duties."

March 5, 10:25 - (AP) Top diplomats from the major players trying to find an end to the crisis in Ukraine are gathering in Paris on Wednesday.

21:43 (Reuters) - President Vladimir Putin delivered a robust defense of Russia's actions in Crimea, but he also sought to ease East-West tension over fears of war in the former Soviet republic. His comments reversed most of the markets' moves on Monday. 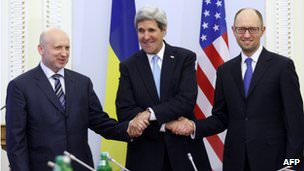 15:10 (AP) - Russia's top gas producer, Gazprom, will remove a discount on the price it charges Ukraine for gas from April, President Vladimir Putin said on Tuesday, stepping up pressure on Moscow's neighbour.
16:46 (AP) - Putin declared that Western actions were driving Ukraine into anarchy and warned that any sanctions the West places on Russia for its actions there will backfire.
16:46 (AP) - Accusing the West of encouraging an "unconstitutional coup" in Ukraine, Vladimir Putin said Tuesday that Moscow reserves the right to use its military to protect Russians there but voiced hope it won't need to do so.
13:50 (AP) - John Kerry arrives to Kiev.
Putin speaks at a news conference saying Russia will only use force if need be and says events in Kiev are moving towards an anti-constitutional coup and armed force of power.
13:39 (Reuters) - Italian Foreign Minister Federica Mogherini says, quoted by Reuters. She was reportedly addressing a committee hearing in the Italian parliament.
13:39 - Russia will meet with representatives of Nato to speak about the crisis in Ukraine.
13:21 - Turkey says it pushed jets on Monday after Russian plane flew along Turkey's Black Sea coast - but stayed in international air space, Reuters news agency reports.
10:20 (AP) - Vladimir Putin ordered tens of thousands of Russian troops participating in military exercises near Ukraine's border to return to their bases as U.S. Secretary of State John Kerry was on his way to Kiev.
March 4, 07:30 (AP) - Secretary of State John Kerry on Tuesday will be reinforcing Washington's support for the new government in Kiev, as the U.S. and its top allies grapple with whether to slap Moscow with sanctions for its military takeover of Ukraine's strategic Crimea region.