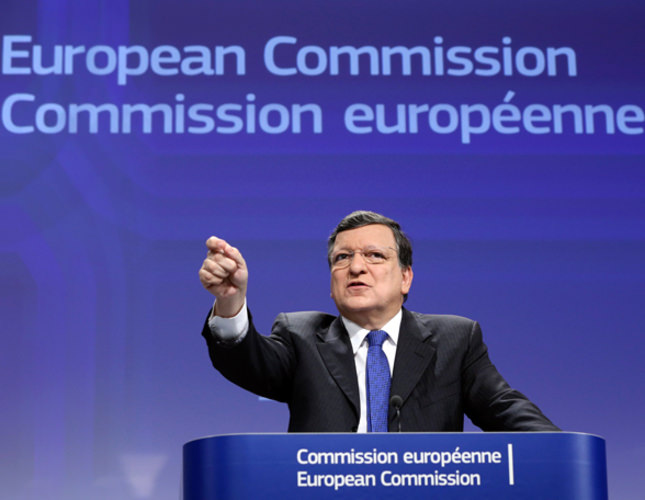 A major package would help stabilize Ukraine, but help won't come unless Ukraine signs a deal with the IMF

Brussels (AP) The European Union offered a larger than expected package of aid to Ukraine on Wednesday, saying it was willing to provide $15 billion in loans and grants over the next several years to help get the shattered economy back on its feet.

European Commission President Jose Manuel Barroso said the assistance, to be discussed by European Union leaders at a summit in Brussels on Thursday, would require widespread reforms by the new Ukrainian government and the signing of a deal between Ukraine and the International Monetary Fund.

The EU had been expected to come up with a package of short-term assistance worth around 1 or 2 billion euros, but instead presented a more comprehensive programme that perhaps by coincidence matched the amount Russia had offered Ukraine before president Viktor Yanukovich's government collapsed.

"The package combined could bring an overall support of at least 11 billion euros over the next couple of years, from the EU budget and EU-based international financial institutions," said Barroso. "It is a package designed to assist a committed, inclusive and reforms-oriented Ukrainian government."

Beyond that, 3 billion will be released from the European Investment Bank between 2014-2016 and the European Bank for Reconstruction and Development, another EU-related institution, is looking into funding totalling 5 billion euros.

Other money will be raised by leveraging funds available from the EU's Neighbourhood Investment Facility, a fund set up to invest in projects in the EU's neighbouring states.

After taking office late last month, Yatseniuk said the country needed $35 billion to survive the next two years. EU officials are currently in Kiev to assess more exactly its needs, which they have indicated are much lower than that.

While the EU's $15 billion offer is likely to be warmly received in Kiev, it is still contingent on the government striking a deal with the IMF on a longer-term aid package.

After years of bad relations between Ukraine and the IMF, the indications are that an agreement can be struck, although it will still require some harsh economic medicine for Ukraine.

At the same time, the United States is finalising its plans for assistance to Ukraine's new leaders, including around $1 billion of loan guarantees. It has said it will also send technical experts to advise the central bank and finance ministry on how to tackle economic crisis.

Ukraine is on the verge of bankruptcy after years of financial mismanagement, high energy costs and currency turmoil. The situation has deteriorated further since the overthrow of Yanukovich and the conflict with Russia.

The West has in recent days stepped up efforts to persuade Moscow to pull its forces from Ukraine's Crimea peninsula and avert the risk of a wider conflict.

As well as financial aid, the EU plans to bring forward trade benefits that Ukraine would have received had it signed an association agreement with the EU in November last year. Yanukovich rejected that deal, triggering the protests that led to his overthrow.

The EU says it will also work on providing energy to Ukraine via "reverse flows" of gas from the EU. Currently, Ukraine is almost entirely dependent on imports of Russian gas. By using "reverse flows" the EU can supply Ukraine with gas that it has received from Russia