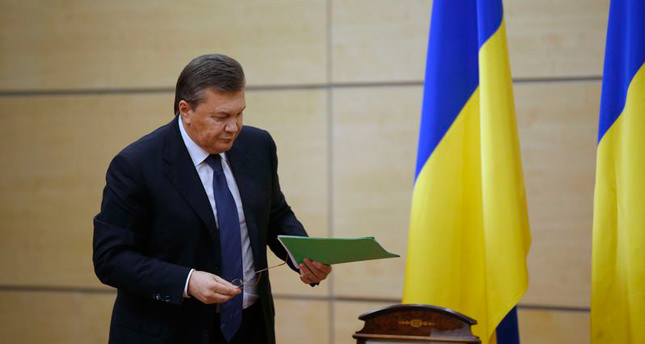 Viktor Yankovych may make his first public appearance in 3 months, after being ousted on Feb. 28

Kiev - Ukraine's exiled pro-Kremlin leader was due to reemerge from the shadows on Tuesday just as a tense Crimea braced for a referendum on joining Russia in a vote roundly condemned by the West.

Viktor Yanukovych was due to face the media in the southern Russian city of Rostov-on-Don, his first appearance since February 28 when he claimed to still run Ukraine despite fleeing the country after three months of deadly protests and being replaced by a Western-backed team.

Yanukovych still enjoys Moscow's recognition and remains a political wildcard who the Kremlin says is pushing for Russia's immediate invasion of Ukraine in the worst East-West crisis since the Cold War.

The North Atlantic Treaty Organization (NATO) responded to the threat of all-out war breaking out on Europe's eastern edge by announcing the planned deployment of AWAC reconnaissance planes in member countries Poland and Romania, which border Ukraine, to monitor any Russian movements.

Moscow also came under intense UN Security Council fire for recognising both the legitimacy of Crimea's referendum, scheduled for Sunday, and its new leaders, who came to power after pro-Kremlin gunmen seized local government buildings.

"It is clear that a free and fair referendum cannot be organised when Crimea is controlled by Russian troops," British UN envoy Mark Lyall Grant.
His French counterpart Gerard Araud added: "The Russians are not showing any sign that they are listening to us."

Russian state television took the unusual step on Monday of airing details of a meeting between President Vladimir Putin and Sergei Lavrov in which the foreign minister complained that US Secretary of State John Kerry had rejected an invitation to visit Moscow to discuss Ukraine.

Lavrov added that Russia was about to unveil the details of its own solution to the crisis that would run counter to US efforts and would appear to leave room for Crimea to switch over to Kremlin rule.

Russian state television's broadcast of the exchange appeared clearly aimed at putting the pressure back on Washington and painting US officials as unwilling to discuss their support for a Kiev interim team that Putin says claimed power through "an illegitimate coup".
The US State Department did not directly confirm Kerry had rejected a visit to Russia that could have included talks with Putin.
But it noted that the two sides had little to discuss until Moscow showed a willingness to negotiate with the new Ukrainian leadership and was prepared to call its Crimean forces back to their barracks.

"When Secretary Kerry spoke with Foreign Minister Lavrov this weekend, he made clear that he would welcome further discussions focused on how to de-escalate the crisis in Ukraine if and when we see concrete evidence that Russia is prepared to engage on these proposals," US State Department spokeswoman Jen Psaki said.
"He never shies away from hopping on a plane or having an in-person meeting, but we want to ensure that that is undertaken with seriousness on the other end as well," Psaki said.


The latest bitter and unusually public row between Moscow and Washington came a day before Ukrainian Prime Minister Arseniy Yatsenyuk heads to the White House for a Wednesday meeting with US President Barack Obama that should add credibility to his untested team.

Yatsenyuk will also use the chance to iron out the details of a $35 billion aid package he says his nation's teetering economy needs to stay afloat over the coming two years after being mismanaged by Yanukovych and his allies, who have been accused of bilking it of billions of dollars.

The White House said Obama would discuss an economic support package that has already seen Washington pledge more than $1 billion and the European Union 11 billion euros ($15 billion) over two years.

And World Bank president Jim Yong Kim said the bank was prepared to offer $3 billion in aid "to undertake the reforms badly needed to put the economy on a path to sustainability".

Crimea is being steered toward its referendum by Sergiy Aksyonov, a 41-year-old with full Kremlin backing known locally as "The Goblin," a nickname earned sometime during his shadowy business past.

He is often seen in public with a bullet proof vest and surrounds himself with a posse of thuggish-looking bodyguards but is an eloquent speaker who ignites passions from crowds with his calls to abandon Kiev and restore "historic justice" in a land that Moscow had ruled for centuries until a Soviet Kremlin leader 'gifted' it to Ukraine in 1954.

He is believed to have made his first political steps in 2009 when he became an activist for three stridently pro-Russian organisations.
His Russian Unity party is known for issuing ethnically disparaging statements about ethnic Ukrainians in Kiev and the more pro-European swaths of the country.