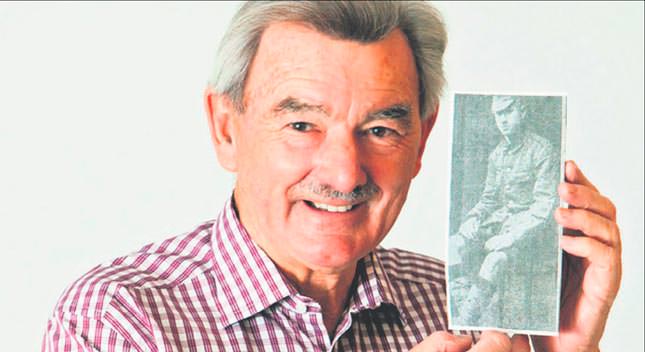 The youngest Briton to fight in World War I at just 12 years old, but his identity remained a secret for a century until the discovery of documents revealed his extraordinary story

POOLE, England – The centenary of the start of World War I in 1914 has brought official recognition of Sidney Lewis's remarkable journey from English schoolboy to fighter on the bloody fields of the Somme. The recognition is a source of pride for Sidney's son Colin Lewis, who only discovered the truth about his father's past a few years ago, long after Sidney died in 1969 aged 66. "The great disappointment is that I can't congratulate him and tell him 'I am very proud of you,'" Lewis, now 80, said from his home in Poole on the southern English coast. "You did a fantastic job, you are a very brave boy actually.Well done, Dad."

The story began in August 1915, when Britain had already been at war for one year. The army was desperate for more men, although it was still reliant on volunteers."Boys would have been filled with the patriotism which was amazingly strong at the beginning of WWI," said Anthony Richards, head of documents and sound at the Imperial War Museum in London. "There would have been a lot of pressure from their families and friends, and from society generally, to do your bit for the war." On holiday from school, the fearless young Sidney decided to take his chances and signed up for the army in Kingston, London. He lied to the recruitment officer about his age, pretending he was several years older. He was not alone. About 250,000 underage soldiers fought for Britain in WWI, according to historian Richard van Emden, author of "Boy Soldiers of the Great War." However, Lewis was a special case. "How a 12-year-old got into the British army is really beyond belief," van Emden said. In a photo from the time Sidney "looked older than his age," the historian noted. He also said that recruiting standards slipped as the war progressed.

Many parents allowed their underage sons to join the army because they thought it might do them some good, while poor families saw it as one less mouth to feed at home. They were often reassured by a rule stating that soldiers could not be sent overseas until they were 19. In Sidney's case, however, his distraught mother had no idea where her son, one of eight children, had gone. She found out one year later when a soldier home on leave mentioned that Sidney was fighting in the Somme with the 106th Machine Gun Company. Horrified, she wrote to the War Office to demand Sidney be sent home, attaching his birth certificate showing he was only 13.

The response was swift. In a letter dated August 24, 1916, an obviously embarrassed army official replied: "I have to inform you that action has been taken. The lad will be discharged with all possible speed." Unscathed, Sidney returned home, but when he was old enough he re-enlisted in the army and served in Austria following the armistice in November 1918. He later became a policeman, got married and, after retiring, ran a pub.

Colin Lewis discovered his father's astonishing history less than a decade ago, after the death of an uncle who had carefully preserved the letters detailing Sidney's service. "My father did mention he had seen some action but I thought it was a little bit of exaggeration because he was too young at the time," Lewis recalled. "I was about 11 or 12, and he never mentioned it again, we never discussed it. "It was like a family secret almost. I think perhaps that he felt he was a bit the black sheep of the family."

The Imperial War Museum has authenticated the documents and recognized Sidney as Britain's youngest soldier from World War I. Colin Lewis is now planning a trip to the Somme with his children and grandchildren to remember where Sidney fought for six weeks and unlike so many others, made it back alive.