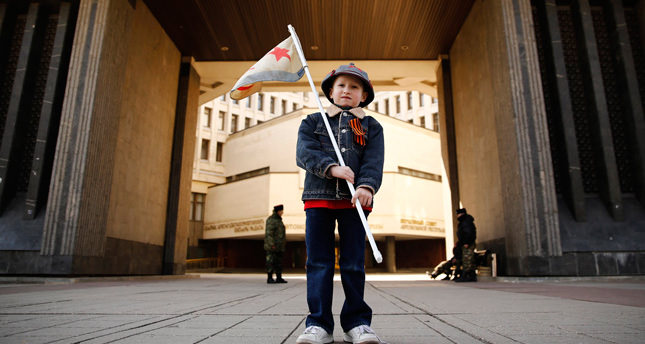 by Associated Press Mar 15, 2014 12:00 am
KIEV, Ukraine – Two people were killed and several others wounded, including a policeman, in a shootout at the building of a far-right Ukrainian nationalist group, highlighting the tensions in the eastern part of the country that have erupted in Ukraine's political turmoil.

Details of the Friday night shooting in the city of Kharkiv were murky, but local news reports said it broke out after a skirmish between pro-Russia demonstrators and their opponents.

Kharkiv, near the Russian border, is a hotbed of pro-Russia sentiment and opposition to the acting Ukrainian government that took power last month after Russia-friendly President Viktor Yanukovych fled the country in the wake of months of protests.

After the skirmish, according to the reports, there was gunfire outside a building housing the offices of several nationalist groups including Right Sector, which was one of the drivers of the protests against Yanukovych and that vehemently opposes Russian influence in Ukraine.

Russia has denounced Right Sector and similar groups as "fascists" who allegedly want to oppress ethnic Russians in Ukraine.

A spokesman for Right Sector in eastern Ukraine, Igor Moseichuk, was quoted by the Interfax news agency as saying the shooting was a "planned provocation by pro-Russian forces."

Interior Minister Arsen Avakov said on his Facebook page that two people were killed and several wounded, including a policeman who was seriously injured. He said some 30 people "from both sides" had been detained.

The victims' identities were not immediately made public. Moseichuk was quoted as saying the two killed were not among those inside the Right Sector offices.

Violence has escalated in Ukraine's Russia-leaning east in recent days, as pro-Russia demonstrators have seized government buildings and clashed with supporters of the new Kiev government. At least one person died and 17 were wounded in clashes in the city of Donetsk on Thursday.

The Ukrainian region of Crimea, where ethnic Russians are a majority, is effectively under Russian control after troops entered following Yanukovych's departure. The region, where the Russian navy leases a massive base for its Black Sea Fleet, is to hold a referendum on Sunday on whether to seek annexation by Russia.