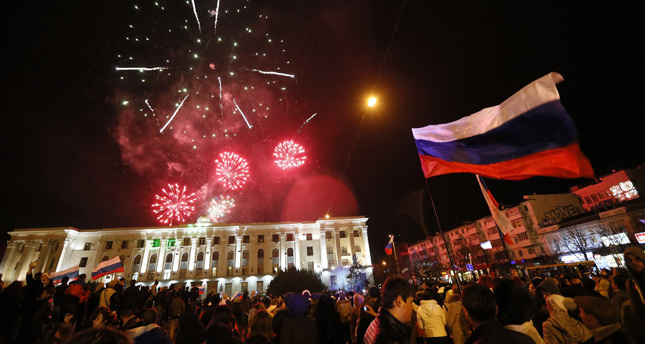 SIMFEROPOL – Crimea's regional assembly on Monday declared independence from Ukraine and applied to join Russia, saying all Ukrainian state property on the peninsula would be nationalised.

Crimea's local prime minister Sergiy Aksyonov also tweeted that starting on March 30, the region would switch to Moscow time (GMT +4), two hours ahead of the current time in Crimea. The document was approved by all 85 deputies present in the 100-seat assembly, after a disputed referendum on Sunday in which Crimeans voted overwhelmingly to join Russia.

It said that from Monday, Ukrainian laws would no longer apply in Crimea and decisions taken by the Ukrainian state since the ouster of Kremlin-backed president Viktor Yanukovych last month had no authority. "The activities of state institutions of Ukraine on the territory of Crimea are finished and their powers, their property and their budgets are transferred to the state organs of the Republic of Crimea," it said.

"All establishments, businesses and other organisations of Ukraine or with Ukrainian participation on the territory of Crimea will belong to Crimea," it added. It was unclear if this would also include Ukrainian military bases. Aksyonov also said in a tweet that 500 Ukrainian soldiers had left their posts in Sevastopol, home to Russia's Black Sea fleet.