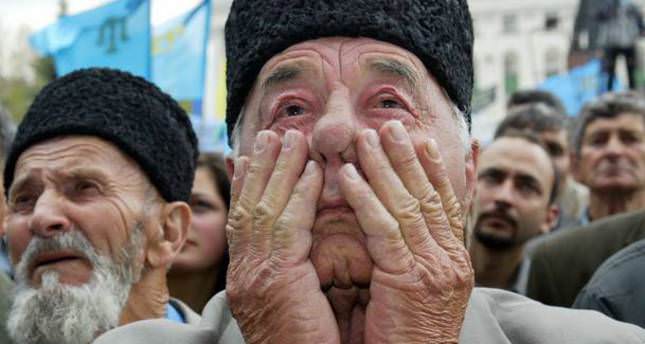 The European Union will not recognize the outcome of Crimea's referendum, top EU officials said yesterday, calling the vote illegal and indicating that the bloc will respond

ISTANBUL – Hardly any Crimean Tatars cast ballots yesterday in Crimea's controversial referendum on whether the region should join Russia or remain part of Ukraine. According to the head of the polling, Ala Fedorova, less than a handful of Crimean Tatars turned up to cast ballots and those who voted were Russians and Ukrainians. despite an outcry and threats of sanctions from the West, Crimeans cast their votes for a referendum on breaking away from Ukraine to join Russia. The referendum, which was condemned as illegal by Ukraine and the West, asks voters whether they would like Crimea to join Russia or return to the Crimean Constitution of 1992, which stipulates that the peninsula will remain an autonomous part of Ukraine.

The referendum results will be confirmed by the Russian Assembly, "Duma," followed by the approval of the Council of the Russian Federation and the ratification of President Putin. The whole procedure is expected to take two weeks at most. Following the political crisis that broke out in Ukraine at the end of last year, the National Assembly curtailed Viktor Yanukovych's presidential authority and a transitional government took power. Tensions in Kiev decreased thanks to the success of anti-government demonstrations and the discharge of Yanukovych. However, the future of Ukraine's political status remains uncertain, which in turn has broken out another crisis in Crimea. In the course of this period, Crimea witnessed the emergence of two different groups. There are pro-Russians who declared the illegitimacy of Ukraine's government and requested a referendum on Crimea's present status. On the other side, there are Crimean Tatars who support the opposition and are against moves to join Russia.

It has been reported that the parliament and the building of the Crimean Presidency are under occupation by armed forces who requested the referendum. Demonstrations are still ongoing and the issue of referendum was only negotiated among Russian representatives in the parliament. The decision for a referendum was taken in order to extend the authority of the Autonomous Republic of Crimea. The parliament under occupation has assigned Sergei Aksenov, leader of the National Bolshevik Party, as the new president. At an emergency meeting, the U.N. Security Council (UNSC) reminded the parties (Ukraine, the U.S., France and China) of the Budapest Convention that Russia should abide by.

Discussing the recent issues in Ukraine, NATO called on Russia to withdraw its military base. The G-7 countries have also denounced Russia's intervention in Crimea and all preparations concerning next June's G-8 Leaders Summit in Soci, Russia have been suspended.
Crimea followed through with the referendum despite international demonstrations.

Meeting on March 6, the Crimean parliament took a decision to join Russia and declared that there would be a referendum on March 16.
The parliament's decision received immediate international repercussions. World leaders, including U.S. President Barack Obama, French President François Hollande, German Prime Minister Angela Merkel and U.K. Prime Minister David Cameron, released official statements stating that the referendum decision was "illegitimate and against the Constitution and international law." The U.N. Security Council gathered five times to discuss the latest issues on Ukraine and Crimea. It is reported that the UNSC, known as the first pillar in ensuring international peace and security, lost its power once again since the parties did nothing but merely repeat their opinions.

The Crimean Parliament's Declaration of Independence of March 11 specifies that "[a] s an independent and sovereign state, the Republic of Crimea should appeal for a decision on joining the Russian Federation as its new federal unit pursuant to the international agreements and referendum results." Russia has refused to recognize the new Western-backed interim administration in Kiev. Its foreign ministry unnerved the new authorities in Kiev by saying clashes in Donetsk showed Ukrainians had lost control of the situation there. Ukraine's interior minister accused ousted president Yanukovich of promoting unrest with "extremist Russian forces." Arsen Avakov issued an appeal on Facebook, saying, "Don't let them manipulate you! ... This isn't a game of toy soldiers."

Two men, aged 21 and 30, were killed in Kharkiv by buckshot late on Friday when pro-Russian demonstrators besieged an office of the far-right Ukrainian nationalist group Right Sector, which rose to prominence fighting riot police in Kiev over the winter. Police said 32 Right Sector activists and six pro-Russian demonstrators were detained and a number of weapons seized. Kharkiv governor Ihor Baluta, newly appointed by the interim authorities in Kiev, called the incident a "well-planned provocation by pro-Russian activists."

The Russian Foreign Ministry said it had information that armed Right Sector militants were opening an "eastern front" and planning to reinforce their activists in eastern cities.

Western powers, preparing economic sanctions against Russia over Crimea, largely dismiss Russia's characterization of the new authorities in Kiev as the successors of Nazi-allied Ukrainian forces which fought the Red Army in World War II.

On Sunday, the European Union said, Crimea's referendum on joining Russia is "illegal and illegitimate", announcing that it would decide on sanctions on Monday. "The referendum is illegal and illegitimate and its outcome will not be recognized," the European Council and European Commission presidents said in a joint statement. EU foreign ministers "will evaluate the situation tomorrow in Brussels and decide on additional measures" against Moscow, they said.