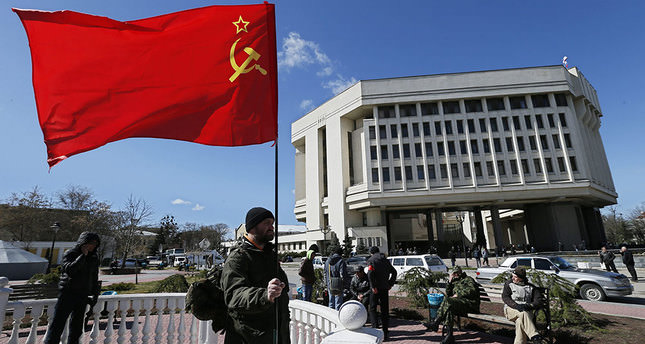 by Raide Oral Mar 17, 2014 12:00 am
ISTANBUL – Russians in Crimea, who constitute the majority of the population, rejoice as the peninsula declares independence and asks to join Russia.

However, as Tatars fear for their future in their homeland, U.S. imposed sanctions on top Russian officials, including an adviser to President Vladimir Putin and former Ukrainian President Yanukovych.

European Union foreign ministers have agreed to impose sanctions including travel bans and asset freezes on 21 officials from Russia and Ukraine Despite the strong reactions of the U.S. and the EU, Crimea's regional assembly applied to join Russia after the referendum held on Sunday.

After a meeting lasting around three hours yesterday, the EU's 28 foreign ministers quickly reached agreement on the list of those to be sanctioned for their part in Russia's seizure of Crimea and Sunday's referendum to secede from Ukraine and join Russia. "[The Foreign Affairs Council] just agreed on sanctions - travel restrictions & assets freeze against 21 official from Ukraine & Russia," Lithuanian Foreign Minister Linan Linkevicius wrote in a message on Twitter.

He added that more measures would follow in a few days, when EU leaders meet for a summit in Brussels. They are expected to expand the list to include more senior figures close to President Putin.

Travel bans and asset freezes have also been imposed by the United States against seven Russian officials linked to the crisis in Crimea, the White House said.

Among those hit with the sanctions are one aide and one advisor to Russian President Vladimir Putin, along with the ousted Ukrainian president Viktor Yanukovych. "Today's actions send a strong message to the Russian government that there are consequences for their actions that violate the sovereignty and territorial integrity of Ukraine, including their actions supporting the illegal referendum for Crimean separation," the White House said in a statement. While the U.S. said, "Russia will pay a price for annexing Crimea," the EU has started talks on Moscow-based investments. European officials said in a joint statement, "The referendum is illegal and illegitimate and its outcome will not be [recognized]."

U.S. Secretary General John Kerry and his Russian counterpart Sergei Lavrov spoke on the phone, and the two discussed "the increasing tension caused by the Russian armed forces and the request of Russian forces' withdrawal in Crimea."

Stating that the current crisis can only be resolved through politics, the U.S. Secretary General said the U.S. would not recognize the referendum results. Kerry further urged Russia to support constitutional reform protecting the rights of Russians and other minority groups in Ukraine. In a statement on Sunday, White House Press Secretary Jay Carney said, "We reject the referendum that took place today in the Crimean region of Ukraine."

Carney noted, "The U.S. has steadfastly supported the independence, sovereignty, and territorial integrity of Ukraine since it declared its independence in 1991." "This referendum is contrary to Ukraine's constitution, and the international community will not recognize the results of a poll administered under threats of violence and intimidation from a Russian military intervention that violates international law. No decisions should be made about the future of Ukraine without the Ukrainian government. Moreover, this vote was not necessary. The Ukrainian government has made clear its willingness to discuss increased autonomy for Crimea," he added.

President Barack Obama also told Russian President Vladimir Putin during a phone call on Sunday that the United States rejected the results of a referendum in Ukraine's Crimea region and warned that Washington was ready to impose sanctions on Moscow over the crisis. "He (Obama) emphasized that Russia's actions were in violation of Ukraine's sovereignty and territorial integrity and that, in coordination with our European partners, we are prepared to impose additional costs on Russia for its actions," the White House said in a statement.
Obama told Putin the crisis could still be resolved diplomatically, but said the Russian military would need to first stop its "incursions" into Ukraine, the White House said.

President Barack Obama said new U.S. sanctions imposed on Russian officials make it clear "that there are consequences for their actions" in Crimea and he's warning that the U.S. stands ready to impose further sanctions if necessary. "We'll continue to make clear to Russia that further provocations will achieve nothing except to further isolate Russia," he stated.

Obama yesterday ordered the freezing of the U.S. assets of seven Russian officials for their support of Crimea's referendum.

US Treasury Department also imposed sanctions on four Ukrainians involved in the secession efforts. "The United States stands with the people of Ukraine and their right to determine their own destiny," Obama said in a brief statement hours after the referendum results were announced.

Pouring into the streets, pro-Russian supporters celebrated the referendum results in various cities, notably in Simferopol, Ukraine. Crimea President Sergei Aksenov stated that the Crimean Parliament would hold an emergency meeting to discuss the resolution on joining Russia, adding a delegation will be sent to Moscow.

Answering the questions on Turkey's approach and the future steps regarding the referendum held in Crimea, Davutoğlu noted that starting from the very early days of the demonstrations, Turkey expected all parties to support Ukraine's territorial integrity and to find a diplomatic and peaceful solution. "Unfortunately, the necessary steps were not taken in the early stages of the crisis and the increased tension resulted in yesterday's referendum." Davutoğlu dismissed the legitimacy of the referendum. "It is not possible to consider yesterday's referendum pursuant to international standards," said Davutoğlu. "There were no public free will, observers and the rational participation of the voters. Besides, a referendum on Ukraine's territorial integrity is entirely illegal within the framework of the Ukrainian Constitution and the Budapest Convention which entered into force in 1994."

Indicating that Turkey adopts a principled approach on this issue, Davutoğlu said, "We wish that the referendum had not taken place. This referendum is not recognized, and has no legitimacy.

Even after the referendum, no solutions have been reached yet. It is urgently necessary to implement diplomatic procedures and the negotiations based on a constitutional reform to discuss Ukraine's territorial integrity and the Autonomous Republic of Crimea."

Results of the referendum were not surprising

Speaking about result of the referendum, Şener Aktürk, an assistant professor of international relations at Koç University, said: "The results of the referendum were certainly not surprising.

Although the referendum was conducted under de facto Russian occupation, and although the Crimean Tatars almost entirely boycotted the referendum, even without the Russian occupation and the Tatar boycott, it is possible that the option of uniting with Russia could garner majority support, but certainly not 93 percent or anything near such an overwhelming majority. However, if given a choice, I think even the non-Tatar majority would prefer being an independent state of their own, rather than uniting with either Russia or remaining within Ukraine. However, both the pro-Western government in Kiev and the Western powers, such as the United States and the United Kingdom, made tremendous mistakes that also contributed to this outcome. Both the Ukrainian nationalists, who gained power in Kiev following the protests in the Maidan, and the Western powers, who welcomed and encouraged the change of government in Kiev, very well knew that Ukraine is a deeply divided country between a Russophone east and the Ukrainian speaking west and that Crimea, with its ethnic Russian majority, is the most vulnerable region within the puzzle of Ukrainian politics."

Aktürk stated: "The new government in Kiev and the Western states should have immediately taken measures to insure that Russian- speakers as well as ethnic Russians feel that their language and culture and interests will be respected and represented by the new government in Kiev. Instead, they followed the opposite, in my view disastrous, strategy of downgrading the status of the Russian language within Ukraine and signaling to Russian-speakers and ethnic Russians that they will be excluded from the new government, and moreover, they even signaled that the Russian Federation's military and economic influence over Ukraine will be significantly reduced.

This was a very unwise strategy and was bound to induce secession backed by Russia. That may have been the mistake of the new government in Kiev. But even worse, the Western alliance and in particular the United States and the United Kingdom failed to live up to the security guarantees they gave Ukraine in the Budapest Memorandum of 1994, which was reaffirmed in 2009, that Ukraine's territorial integrity will be preserved and protected by the international community. While Ukraine is being partitioned and occupied, the Western alliance did nothing concrete to halt this process. While the United States stopped short of a military intervention in Syria against the Assad regime because of Russian opposition, Russia did not stop short of a military intervention in Crimea because of opposition from the United States, even though the Kiev government is not even guilty of the war crimes and mass atrocities that the Assad regime in Syria is. The contrast between Syria and Ukraine is remarkable and comparing the two cases speaks volumes about the current state of the international system."

Crimea is a lesson for ever yone in Turkey

İlnur Çevik, evaluating the situation in Crimea, said that Crimea is a lesson for everyone in Turkey, adding: "Russia has put into motion the last phase of its operation to annex Crimea, and the game that the Western powers played in Ukraine has backfired. In the power struggle between the Western powers and Russia, the West encouraged a popular uprising and managed to topple the pro-Russian administration.
But the price paid by Ukraine and the West was high, as Russia moved to get the Crimeans to vote in a referendum to part from Ukraine and eventually join Russia." He added: "Today, as we head for local elections, we see political parties bitterly fighting each other, and we observe a destructive war in progress between the Fethullah Gülen religious community and the Erdoğan administration.

Let everyone remember Crimea. They create sedition and thus create an environment ripe for separation. ... Let us hope the Western powers do not try to play the Kurdish separatism card against us after the elections, exploiting the political situation in Turkey. ... Let no one miscalculate the situation here and push us all into an adventure that will not serve the Turks or the Kurds."

Afize Yusuf Qızı, reporter for the Crimean Tatar TV channel ATR, said: "The Crimean Tatars comprise almost 14 per cent of the population. Almost the entire population (99.99 percent) boycotted the referendum and did not participate. The majority of Ukrainians who make up 24 percent of the population, also boycotted. There are even some Russians who did not go to the polls. In consideration of the present figures, it is not rational to say that the participation rate was 79 percent. This rate is not real. There were many violations in the referendum. The people whose names were not included on the voter lists had the right to vote. In other words, a person living in Simferopol can vote in Bakhchysarai. The present situation renders the referendum legally dubious."