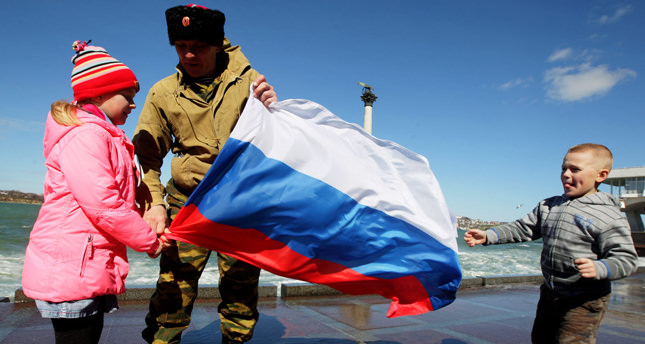 by French Press Agency - AFP Mar 18, 2014 12:00 am
MOSCOW – President Vladimir Putin on Tuesday took the first steps to absorb the Ukrainian region of Crimea into Russia, in what would mark the most significant redrawing of Europe's borders since World War II.

Putin officially informed parliament of Crimea's request to join Russia and instructed the national branches of power to approve an agreement for Crimea to become part of the country.

He was due to address both houses of parliament at 1100 GMT after recognising Crimea's independence late Monday in what was seen as
the initial step towards it becoming Russian territory.

The seizure of Crimea by pro-Russian forces following the ousting Ukraine's pro-Moscow president Viktor Yanukovych last month has been condemned around the world and the United States and European Union on Monday issued the first sanctions against a handful of Russian officials.

But such sanctions are unlikely to deter an increasingly defiant Putin who is set to base the justification for the de-facto annexation of Crimea on the weekend referendum in the region where almost 97 percent voted to split from Ukraine and become part of Russia.

"The president is going to set out his position over the request of Crimea to become part of Russia in line with the result of the referendum," said Sergei Naryshkin, speaker of the State Duma lower house of parliament.

With overwhelming support for the move within Russia itself, tens of thousands of people are expected to hold a rally in central Moscow with the slogan "We are together" after Putin's speech.

Crimea has long held a great hold over the Russian psyche. The lush peninsula has been the base of Kremlin navies since the late 18th century and only became part of Ukraine in 1954 after Soviet leader Nikita Khrushschev transferred it from Russia.

Russia now appears set to present the absorption of Crimea as a just response to a request made by a state that is already independent, albeit recognised by no one but Moscow.

State Duma MPs appear to have quietly shelved a bill that would have allowed Russia to have directly annexed Crimea, possibly on legal advice.

Putin's moves on Tuesday set the stage for parliament to approve the absorption of Crimea following approval by the Russian Constitutional Court.

"Parliament will deal with its responsibility quickly and responsibly," said Naryshkin.

The asset freezes and travel bans announced by the United States and the European Union - billed as the most significant sanctions
against Moscow since the end of the Cold War -- appear not to be enough to influence Russia.

But a big question remains whether Russia will stop at the already audacious move of taking Crimea under its control or whether it also has its eye on the Russian-speaking regions of Russian-speaking south and eastern Ukraine.

"If Russia continues to interfere in Ukraine, we stand ready to impose further sanctions," Obama warned.

"These are by far the most comprehensive sanctions applied to Russia since the end of the Cold War - far and away so," said a senior US official.

Officials said that, for now, the sanctions would target individuals and not wider Russian business interests.

But they noted that the new executive order signed by Obama allows future measures to target "individuals with a great deal of influence over... Russian governmental policy and the economy who do not hold positions in the government."

Obama said a diplomatic solution to the crisis was still possible if Russia pulls its troops back to barracks in Crimea, allows foreign observers to deploy and agrees to negotiate with Ukraine.

But he warned: "Further provocations will just further isolate Russia and diminish their place in the world."

Those targeted under Obama's executive order will see assets and interests in the United States or under US jurisdiction blocked and Americans will be barred from doing business with them.

British Foreign Secretary William Hague called for dialogue, stressing that "for the UK and her allies the Crimea remains part of Ukraine."
"Continuing to ignore those calls will bring serious consequences for Russia," he said.

He warned a "deterioration of the situation will have serious repercussions for the people of Ukraine, the region and beyond."
Meanwhile, diplomats in Brussels said EU and Ukrainian leaders would on Friday sign the political portion of a landmark pact whose rejection by Yanukovych in November sparked protests that led to his fall.

But the undaunted government of Crimea took several decisive steps aimed at permanently severing its ties with Kiev.
It has begun seizing control of Ukrainian institutions and plans to set the peninsula's clocks two hours forward to Moscow time.
Ukraine's new interim president Oleksandr Turchynov has denounced the Crimea referendum as a "great farce."

Moscow has refused to recognise the pro-West government that took power in Ukraine after the fall of Yanukovych, saying it was putting the lives of Russian citizens and speakers in danger.