Putin: Crimea is a part of Russia 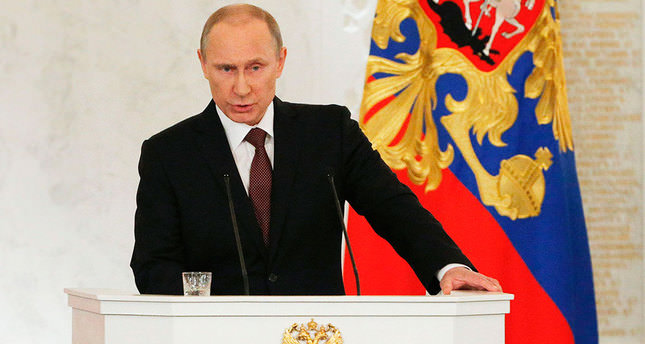 ISTANBUL – Russia's President Vladimir Putin signed a decree yesterday recognizing Crimea's integration into Russia and forming new federal regions Addressing right and left-wing representatives of parliament, representatives of NGOs and officers from the Crimean Regional Assembly at the Grand Kremlin Palace, Putin stated that the referendum took place with the Crimean people's free will, adding Crimea appealed to join Russia and their proposal was taken into consideration.

Putin has proposed that the Council of Federation, the upper wing of the Russian parliament "integrate Crimea and Sevastopol into the Russian Federation and form new federal regions." Putin also asked the Russian Constitutional Court to take the necessary resolutions. "Crimea is a historical part of Russia. The referendum is based on international law.

Crimea is comprised of various nations. The country should have three official languages including Russian, Ukrainian and Tatar." "Crimea has declared its independence pursuant to U.N. criteria. Ukraine had previously exercised this right and left the Soviet Union (USSR). Now, they do not want Crimea to exercise this right," said Putin.

He added: "Thousands of Russian citizens slept in one country and woke up in a different one. The Crimean people say they were passed from one hand to another in 1991. Russia was in difficulty at that time and could not protect its interests. They are now threatening us with imposing sanctions. We have already experienced a number of restrictions.

The policies that drive Russia into a corner have still been carried out. However, everything has limitations. Russia always respects Ukraine's territorial integrity. Do not believe the words of those who frighten you with Russia. We do not want Ukraine's separation; we do not need it. As seen in many centuries, Crimea will continue to belong to its people. Crimean territories are our common heritage. This country has strategic importance and will maintain its existence under Russian's sustainable sovereignty.

At a joint press conference with Danish Prime Minister Helle Thorning-Schmidt, Turkish President Abdullah Gül said: "Turkey has reiterated the importance of Crimea's territorial integrity. International law must be observed since Russia's de facto occupation may cause some other unrest and problems in Europe."

Underlining the importance of avoiding tension and abiding international law, President Gül added, "Otherwise, starting a new cold war is in nobody's interest, and everyone will suffer."

Similarly, Prime Minister Thorning-Schmidt noted that Crimea's appeal to join Russia is against not only the law of Ukraine and but also international law. Noting that the EU has sent an explicit message to Russia through investments, Schmidt said, "Russia should come to the table to resolve the present problem through negotiations."

Ukraine does not recognize a treaty signed in Moscow on Tuesday making its Crimean peninsula a part of Russia, the Ukrainian foreign ministry said. "The signing of the so-called agreement concerning Crimea joining the Russian Federation and the corresponding address by the Russian president has nothing in common with law or democracy or common sense," ministry spokesman Evhen Perebynis said on Twitter. "Putin's address very clearly demonstrates just how real the threat is that Russia poses to international security," he said.

Late Monday, the United States and the European Union imposed personal sanctions on a handful of officials from Russia and Ukraine who were accused of involvement in Moscow's military seizure of the Black Sea peninsula, in the biggest crisis between Russia and the United States since the end of the Cold War.

President Barack Obama is gathering allied leaders for a meeting in Europe next week to discuss further action in response to Russia's involvement in Ukraine.

White House spokeswoman Caitlin Hayden said Obama on Tuesday invited leaders of the G-7 and the European Union to meet on the sidelines of a nuclear summit next week in the Netherlands. Hayden said it will focus on what steps the group can take to respond to developments in Ukraine.

The members of the G-7 are the United States, Canada, France, Germany, Italy, Japan and Britain. The group already has suspended preparations for a G-8 Summit hosted by Russia in Sochi that had been scheduled for June.