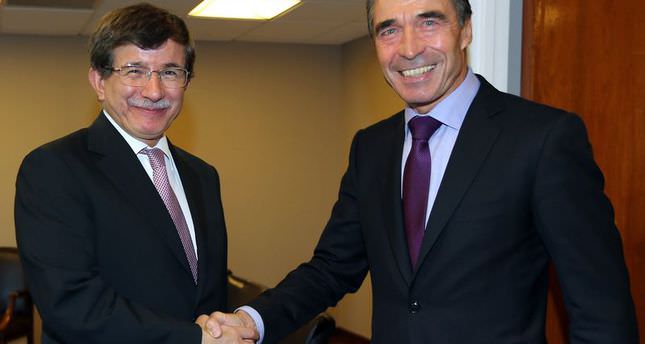 The foreign ministers of NATO member states meeting today in Brussels are set to discuss the Russian takeover of the Crimean Peninsula, with the alliance expected to label Russia's move illegal

As part of his visit to Brussels, the Turkish foreign minister is expected to meet with U.S. Secretary of State John Kerry and EU Foreign Policy Chief Catherine Ashton.

During his meetings in Brussels, Davutoğlu will discuss Syria, the crisis in Ukraine and the Middle East peace process.

NATO foreign ministers are set to meet today in Brussels, with the Crimea crisis no doubt topping the agenda. The ministers will attend a session of the NATOUkraine commission.

Ahead of the meeting, on Sunday U.S. Secretary of State John Kerry and his Russian counterpart, Sergei Lavrov, also met in Paris and discussed ways to defuse the Ukraine crisis. During the talks, Kerry made clear Washington still considered Russian actions in Crimea "illegal and illegitimate."

Direct military aid to Ukraine will not come under consideration at the NATO meeting, a senior official of the Atlantic alliance said Monday on the condition of anonymity.

The source also said there will be no review of the operational aspects of the alliance's relationship with Ukraine.

According to the source, the talks will focus on expanding cooperation with Ukraine under the framework of the existing commission.

The Crimean people voted to join Russia following a referendum on March 16. Denounced by Western countries, the referendum was held one month after pro-Russia Ukrainian President Victor Yanukovych was removed from power and a pro-Western transitional government took over. Meanwhile, the U.S. and the EU agreed to impose sanctions to punish Russia for annexing Crimea. The crisis broke out last November when Yanukovych refused to sign the Association Agreement with the EU. Yanukovych left the country on Feb. 22 after more than 80 people were killed in a crackdown against protesters.

Russia then commenced military interventions and Crimea came under the control of Russian armed forces.