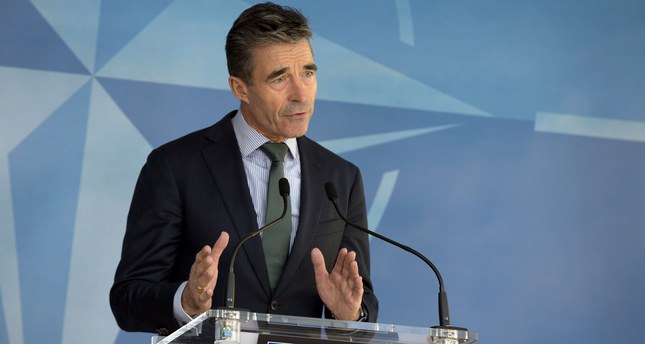 by Anadolu Agency Apr 01, 2014 12:00 am
BRUSSELS — Ministers from NATO's 28 member countries met in Brussels yesterday for the first time since Russia's military occupation and annexation of Ukraine's Crimea region triggered the worst East-West crisis since the Cold War. They will discuss ways to boost NATO's military presence in Central and Eastern Europe and reassure allies rattled by the crisis. "Unfortunately, I cannot confirm that Russia is withdrawing its troops. This is not what we are seeing," Secretary General Anders Fogh Rasmussen told reporters at the start of the talks.

Diplomats said the ministers would consider options ranging from stepped up military exercises to sending more forces to eastern member states to the permanent basing of alliance forces in those countries, a step Moscow would view as provocative.

Asked if NATO could station forces permanently in the small former Soviet Baltic states, Rasmussen said, "We are now considering all options to enhance our collective defense, including ... the further development of our defense plans, enhanced exercises and also appropriate deployments."

NATO foreign ministers will show their steadfast commitment to allied collective defense in the wake of the Ukraine crisis and agree on ways to support Ukraine, said Rasmussen at the start of the two-day ministerial yesterday. "Defense starts with deterrence, so we will take the necessary steps to make it clear to the world that no threat against NATO allies will succeed," he said.

Russia's aggression against Ukraine "challenges our vision of a Europe whole, free and at peace," said the secretary general. "It fundamentally changes Europe's security landscape and it causes instability right on NATO's borders."

The ministers' first working session will focus on increasing support for Ukraine and on the consequences of Russia's illegal military actions for NATO-Russia relations. They will also meet with Ukrainian Foreign Minister Andrii Deshchytsia in a session of the NATO-Ukraine Commission. "We will agree on ways to support our partner Ukraine, with political and practical measures within the framework of our long-standing partnership," said Rasmussen. "An independent, sovereign and stable Ukraine, firmly committed to democracy and respect for human rights, minorities and the rule of law, is key to Euro-Atlantic security."

The secretary general also said that ministers will make clear that Russia's actions are unacceptable. "We will take decisions on what cooperation with Russia is still appropriate.

Through its actions, Russia has undermined the principles on which our partnership is built, and has breached its own international commitments. So we cannot go on doing business as usual," he said.

Polish Foreign Minister Radoslaw Sikorski told reporters as he arrived that he would welcome "some more prominent NATO presence in Poland."

Some NATO members are cautious about taking steps that could aggravate the crisis, particularly after Moscow said on Monday it pulled some troops back from near the Ukrainian border.

But a NATO military official, speaking on condition of anonymity, said Russia still had some 35,000 to 40,000 troops stationed near the border and that there was no sign of any significant reduction in their numbers.

There was also little evidence that the troops were there for training, the official said.

There were some exercises but other units were moving to a location and staying put. "It's an indication of troops given orders to deploy somewhere and awaiting further orders," he said.

The United States and its allies have made clear they have no military plans to defend Ukraine, which is not a NATO member.

Since the Crimea crisis erupted, the United States increased the number of U.S. aircraft in regular NATO air patrols over the Baltic States and beefed up a previously planned training exercise with the Polish Air Force.