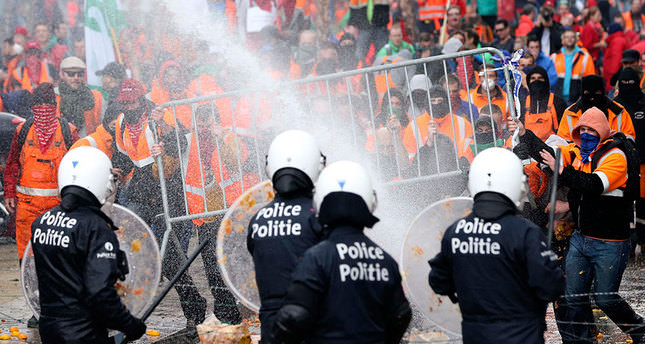 by AA Apr 05, 2014 12:00 am
BRUSSELS — Belgian police used water cannon Friday to disperse a protest attended by around 40,000 members of labor unions hailing from European Union (E.U.) countries in Brussels.

The protestors gathered in the Belgian capital as part of the "A New Path for Europe" campaign against the E.U.'s austerity policies and unemployment.

Water cannons and gas bombs were used against the crowd, from which cobblestones were thrown. Emanuela Bonacina, a spokesperson for the European Trade Union Confederation which organized the protest, said the protests were an initiative for fostering a European economic policy that involves "no austerity, but big investment aimed at steady economic growth and quality jobs."

Protesters called on E.U. citizens to cast their ballots during the European elections, due on May 22-25, for candidates who will change the policies applied by the E.U. administration.