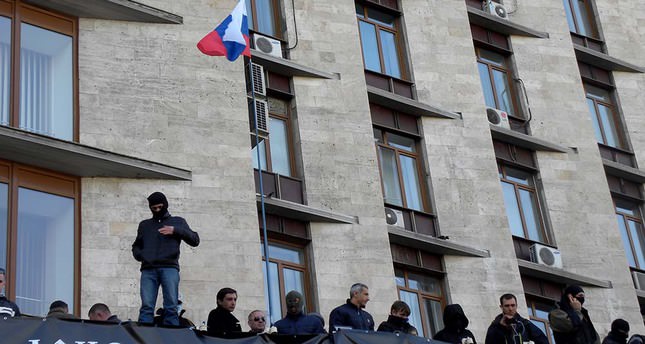 Clashes in Donetsk and similar rallies in the heavily Russified cities such of Lugansk and Kharkiv provided another reminder to the untested pro-Western leaders in Kiev of the monumental task facing them after their February 22 overthrow of president Viktor Yanukovych.

The unrest comes with Ukraine's borders surrounded by Russian troops who had earlier seized the Black Sea peninsula of Crimea and the economy in tatters after decades of mismanagement and government theft.

Both election frontrunners want to tie the vast country's future to Europe and break its historic dependence on Russia.

The day's most violent protest saw nearly 100 activists move away from a crowd of 2,000 rallying on the main city square of Donetsk to storm and occupy the government seat where they raised the Russian flag.

They threw firecrackers at about 200 riot police and ripped away several of their shields before raising the Russian flag above the 11-story building.

Some in the bustling city of one million chanted "Give us a referendum" and "NATO go home".

Police in the eastern city of Lugansk were forced to fire tear gas at a few hundred protesters who broke into the local security service building in order to win the release of 15 pro-Russian activists arrested earlier in the week.

The region's security service had accused the group of planning to seize the main administration building on Thursday with "the use of arms and explosives".

An AFP reporter saw several men break down the door of the security service building while others pelted its windows with stones and eggs. Local news reports said two police officers were hurt in the melee.

Unconfirmed reports from pro-Russian media sources said the activists had managed to secure the release of six of the 15 alleged Lugansk coup plotters and had barricaded themselves inside the building.

Several dozen people also entered the government seat in the eastern city of Kharkiv after breaking through police lines.

They thrust several Russian flags out of windows as a crowd of about 2,000 outside cheered and chanted "The police are with the people".

The police officers refused to use force against the crowd and moved about 50 meters (165 feet) away from the government seat after the Russian supporters broke inside.

An AFP reporter in Kharkiv also saw several hundred protesters surround a group of pro-European supporters who were mistaken for members of the ultra-nationalist Right Sector group.

The group was forced to march down a steep hill on their knees in what appeared to be a humiliation ritual that drew no police response.

The unrest and threat of bloodshed has sparked concern in both Kiev and Western countries that Russian President Vladimir Putin may order his troops into the eastern regions following his promise to "protect" his compatriots there.

Washington believes that Russia has massed about 40,000 soldiers near the eastern border of Ukraine.

Moscow has denied plans to move its troops beyond Crimea but has thus far pulled only a few hundred troops back from the border region.

The latest violence prompted acting President Oleksandr Turchynov to cancel a planned visit to Lithuania and call an emergency meeting of his national security and defence council.

Interior Minister Arsen Avakov accused Putin and Yanukovych - now living in self-imposed exile in Russia - of "ordering and paying for another wave of separatist turmoil in the country's east". "The situation will be brought under control without bloodshed," the interior minister wrote in a message posted on his Facebook account. "But at the same, a firm approach will be use against all who attack government buildings, law enforcement officers and other citizens," Avakov warned. Kiev and western regions of Ukraine that have ancient ties to nations such as Poland and overwhelmingly support the old government's ouster have recently been free of protests but also remain tense.

A prominent Right Sector leader was killed in a police shootout in western Ukraine late last month while another member of the group was arrested after wounding three when he opened fire near a central Kiev hotel last week.

The far right Svoboda party said that the body of one its more prominent activists had been found Saturday dumped in the woods with signs of torture a day after his abduction in the central village of Vygrayev.

Prosecutors said they had launched an investigation but provided no other details.

Svoboda is the current parliament's fourth-largest faction and is headed by the billionaire Sergiy Tigipko, a veteran politician who is known for making disparaging remarks about Jews and is also standing for president in next month's elections.