Round two of Ukraine's end 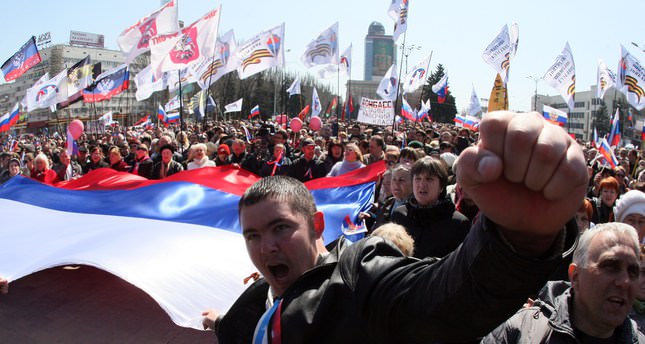 by Raide Oral
Apr 07, 2014 12:00 am
ISTANBUL — Pro-Russian protestors in Donetsk, Luhansk and Kharkov yesterday clashed with police, flied Russian flags on public buildings and called for a referendum for independence. Protesters raided into the security building in Luhansk and captured weapons.

Blocking the entry and exit points of the city, the police took security precautions around.

Police declared that unknown persons managed to get into the building and captured the weapons in the ammunition store.

It was also reported that protestors who captured the government building were removed in Kharkov, where a similar demonstration was seen. Minister of Internal Affairs Arsen Avakov made a statement on his Facebook account saying that the building which was captured on the weekend is now "completely saved from the separatists."

Proponents of Russia set up barricades in governor's building in Donetsk on Sunday.

The protestors lowered the flag of Ukraine and flied Russian flag in its place.

After ousted President Yanukovych had to leave the country due to mass demonstrations, protestors took to the streets of Crimea which was annexed to Russia. Russia's President Vladimir Putin justified the move, claiming that they have the right to protect the Russian-speaking minority in Ukraine. The Ukrainian government has accused Russia of intervening in the internal matters of Ukraine.

On account of recent violence the Provisional President of Ukraine, Oleksandr Turchynov cancelled his visit to Lithuania and called security authorities to an urgent meeting.

Prime Minister of Ukraine Arseny Yatsenyuk spoke about recent events and said that what is happening in the three eastern cities is part of Russia's plan to divide Ukraine and land troops in the area. Yatsenyuk stated that Russian soldiers are 30 kilometers away from the Ukrainian border and continued, "An operation against Ukraine is already put into force. Foreign soldiers are ready to cross the border and invade the area. Yet, we will not allow this."

A referendum was held in Crimea on March 16, 2014 and Russia annexed despite the fact that the plebiscite was boycotted by Tatars.

Hundreds of thousands of Crimean Tatars were expelled from their countries by Soviet leader Stalin in 1944 and Russian and Ukrainian populations were settled instead.

Assoc. Prof. Dr. İsmail Türkoğlu at Marmara University, spoke to Daily Sabah about the latest developments. He put forward that Pan-Slavism rose from the dead 100 years.

"Pan-Slavism started to be mentioned as a political idea in the early 19th century for the first time. Even though this political movement belonged to Western Slavs (Czechs and Slovaks), those who promoted the idea in the political arena were Russian nationalists. The Tsardom of Russia could not find the expected support from Balkan Slavs during the Crimean War. Thereon, the idea of a new political formula was put forward, under which all Slavs can gather, in order to find support not only in Balkans through activities of politicians who adopted the Slavism idea, but also in the Eastern Europe. These attempts started during the Crimean War and the idea was put into action after the war. The Slavic Benevolent Committee founded in 1858 led the expansionist policy of Tsardom of Russia in the Eastern Europe and Balkans. The Slavic Benevolent committee started a huge struggle for the independence of Slavic People living in the Ottoman Empire and Austria-Hungary with the help of Tsardom's authorities. In the end, the Committee fulfilled this goal by letting both empires dismember. Sleeping for a century, the movement rose again today," Türkoğlu remarked.

Türkoğlu also commented on the protests in Donetsk, Kharkov and Luhansk. "One of the striking slogans during the meetings in Ukraine was "Russia, Ukraine, Belorussia, One Nation, One History and One Future."

This was the very ambition of the Pan-Slavists a century ago: To gather Russian people in the Eastern Europe, Balkans and Russian Empire under one flag. "Since March, the protests in Donetsk, Kharkov and Luhansk in the Eastern Ukraine have not calmed down. The protests are getting intense in every weekend. Last night, protestors captured some government buildings in the area and the building of National Intelligence Service in Luhansk and flied Russian flag on the buildings. The protestors want to elect their governors instead of the ones designated by the headquarters and determine their own destiny through referendum," Türkoğlu noted.

The professor added, "Ukrainians ranks third after the Russian and Tatars in the Russian Federation in terms of population, there is no action, neither a demonstration nor a protest. They are weeping for dismemberment of their countries in silence. Both the intelligentsia and artists are indifferent to the dismemberment. Even though a few weak voices are raised, they do not reflect public opinion.

May the fact that Russia, a federation itself, annexed Crimea with regard to referendum results, make Russia stuck in a difficult situation against the possible demands of independence from its own states? It does not seem possible when the current political, economic and military power of Russia is considered."

Meanwhile, the U.S. ambassador to the Organization for Security and Cooperation in Europe said Russia had amassed tens of thousands of troops near the border with Ukraine and called on Moscow to take steps to de-escalate the situation. "We have strong evidence that there are tens of thousands of forces on the border and again not in their normal peacetime positions or garrisons," Daniel Baer told reporters after an emergency meeting of the 57-member Organization for Security and Cooperation in Europe on Monday to discuss the issue.

Prime Minister Arseny Yatseniuk said in Kiev, "Protests in eastern Ukraine in which pro-Russian activists seized public buildings in three cities are part of a plan to destabilize Ukraine and bring in Russian troops who were in a zone less than 30 kilometers from the border."
Last Update: Apr 07, 2014 10:24 pm