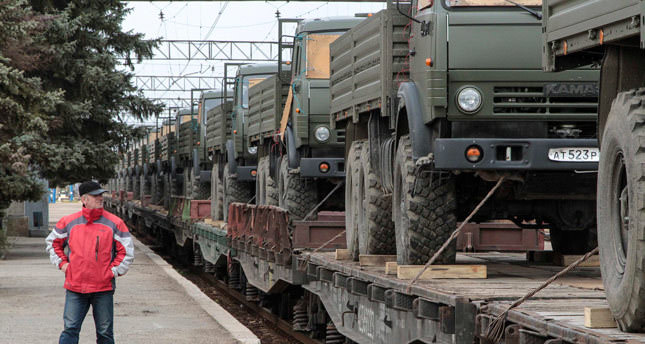 by reuters
Apr 07, 2014 12:00 am
VIENNA — The U.S. ambassador to the OSCE said Russia had amassed tens of thousands of troops near the border with Ukraine and called on Moscow to take steps to de-escalate the situation.

"We have strong evidence that there are tens of thousands of forces on the border and again not in their normal peacetime positions or garrisons," Daniel Baer told reporters after an emergency meeting of the 57-member Organisation for Security and Cooperation in Europe on Monday to discuss the issue.

The Russian delegation did not address the meeting, Baer and other diplomats said.

"What the Russian Federation should be doing is taking steps to de-escalate the crisis. They have played a principal role in the crisis and there are clear practical steps they can take to de-escalate," including engaging with the international community and allowing inspections of troop movements, he said.

Protests in eastern Ukraine in which pro-Russian activists seized public buildings in three cities are part of a plan to destabilise Ukraine and bring in Russian troops who were in a zone less than 30 km (19 mile) zone from the border, Prime Minister Arseny Yatseniuk said in Kiev.