Ukraine's deadline is midnight for payment to Russia 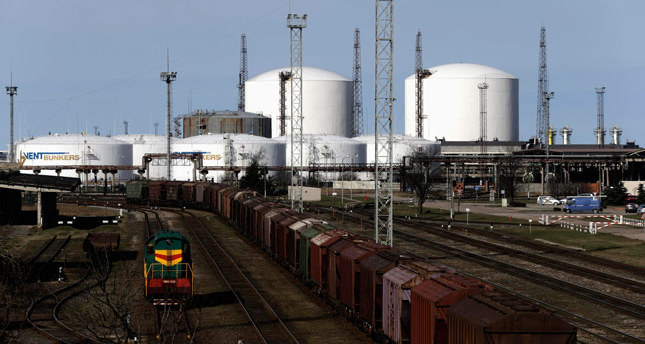 by Apr 07, 2014 12:00 am
BRUSSELS — EU officials will meet Ukraine's energy minister on Tuesday as well as review the bloc's own gas storage levels as fears grow that rising tensions between Moscow and Kiev might lead to a cut-off of gas supplies.

At midnight a deadline expires for Ukraine to reduce the $2.2 billion debt it owes Moscow for natural gas deliveries. So far Ukraine has offered no payments, Moscow says, raising the risk of supply disruption, with possible knock-on effects for the European Union.

Ukraine imports around half of its gas needs from Russia, and the European Union meets a third of its demand through imports from Russia, with 40 percent of that gas flowing through Ukraine.

Oettinger has been trying to broker a deal with Slovakia to allow Ukraine to receive up to 8 billion cubic metres a year in a reverse flow of gas from Slovakia.

The officials also confirmed that a meeting of the bloc's gas coordination group would take place on Tuesday but played down its significance. They said stocks were comfortable and that the meeting was not an emergency session.

"It's just to take stock," one official said.

The talks coincide with a deepening crisis between Russia and Ukraine.

Pro-Russia activists occupying a regional government building in Donetsk, in eastern Ukraine, on Monday proclaimed the creation of a separatist Donetsk republic, prompting Ukraine's interim president to say Moscow had entered a "second stage" of operations aimed at breaking up Ukraine.

East Ukraine is one of Europe's most important natural gas supply hubs, where Russia's main pipelines enter Ukraine for domestic use as well as for transit to the European Union.

Also on Monday, the U.S. ambassador to the OSCE said Russia had amassed tens of thousands of troops near the border with Ukraine, calling on Moscow to take steps to de-escalate the situation.

Official Commission figures show EU gas storage levels of around 36 billion cubic metres, roughly half full, and analysts said that a short-lived Russian supply cut would be met by reserves and alternative supplies.

The EU's gas coordination group, which brings together energy experts from the 28 EU member states, was set up in response to previous pricing rows between Russia and Ukraine, which raised concerns about EU supply security.

It met in March, when officials from some EU countries, such as Poland and Greece, said they were worried they could face gas shortages and economic damage if Russia stopped pumping gas to Ukraine.

However, they also said most nations were amply supplied after a very mild winter.

Oettinger said last month that a reverse-flow pipeline deal to ship gas from Slovakia to Ukraine could be agreed before the end of April. But progress has been slow, Ukraine says.

"We have still had no response from the Slovak side on our proposal to send a group of experts to the Kapushany gas station in a bid to see how we can perform the reverse," Ukraine's Prodan told reporters in Kiev.

"Slovakia is simply proposing to us to sign a memorandum which provides for the construction of a pipeline and to invest about 20 million euros within a term of 10 months," he added. "We want to go and see whether we can carry out the reverse flow without such significant costs."

During the visit to Brussels on Tuesday, the delegation from Ukraine will also attend a round-table session on security of supply with representatives of the gas industry.

A copy of an invitation to industry, seen by Reuters, says Oettinger invites "relevant gas companies for a frank and open discussion" to contribute to EU energy security for the next winter and over the mid-term. In particular, it cites the importance of including liquefied natural gas operators.