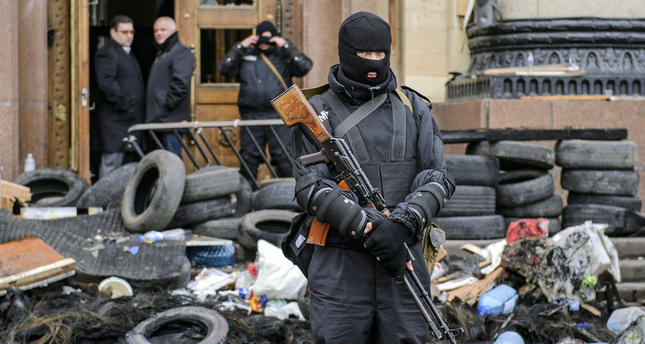 NATO'S Secretary-General Anders Fogh Rasmussen warned Russia against intervening in Ukraine any further as Ukrainian authorities detained 70 people in Donetsk while dispersing those who occupied the regional administration building. Meanwhile, Russia is blamed for the further unrest in Kharkiv

PARIS — NATO's secretary general said yesterday that events in eastern Ukraine were cause for great concern and called on Russia to pull back troops from the border with its neighbor. "If Russia were to intervene further in Ukraine it would be a historic mistake," Anders Fogh Rasmussen told a news conference in Paris. "It would have grave consequences for our relationship with Russia and would further isolate Russia internationally."

Rasmussen said it was premature to talk about a military response were Russia to move into eastern Ukraine, but urged Moscow to pull back the "tens of thousands of troops" that had massed on Ukraine's borders. "We have all plans in place to ensure effective defense and protection of our allies," he said. "It is obvious that the evolving security situation in Ukraine and along its borders make it necessary to review our defense plans and look at how we could strengthen our collective defense."

He said NATO was reviewing a 1997 co-operation agreement with Russia and subsequent Rome declaration of 2002 that prevented NATO setting up bases in eastern and central Europe and its foreign ministers would decide on that in June. "Those decisions will be impacted by the situation in Ukraine and Russian behavior," Rasmussen said.

When asked whether France should cancel a deal to sell two helicopter carriers before the first one is delivered later this year, Rasmussen said: "I am not going to interfere with national decisions, but I am confident that France will take the necessary decisions taking into account all the concerns that have been expressed."

Police detained 70 people occupying a regional administration building in eastern Ukraine overnight, but pro-Moscow protesters held out in a standoff in two other cities in what Kiev called a Russian-led plan to dismember the country.

Interior Minister Arsen Avakov said protesters in the town of Kharkiv had been cleared in a lightning, 18 minute "anti-terrorist" operation, pinning responsibility for the building's occupation on Russian leader Vladimir Putin and Ukraine's ousted Moscow- backed president Viktor Yanukovich. "All this (in Kharkiv) was inspired and financed by the Putin-Yanukovich group," said Avakov.

The pro-Russian protesters have been demanding that referendums be held on whether to join Russia like the vote, dismissed by the Kiev and West as illegal, that endorsed Crimea's return to rule by Moscow.

An aide to Avakov said police went in when the Kharkiv protesters failed to give themselves up and surrender their arms. No shots were fired by the police, although some had been from the other side and a grenade was thrown, he said. One police officer was badly wounded and some others less seriously hurt.

The standoff however continued in the mining center of Donetsk - Yanukovich's home base - where a group of pro-Russian deputies inside the main regional authority building on Monday declared a separatist republic.

Ukraine has been in turmoil since late last year when Yanukovich rejected closer relations with the European Union and tilted the former Soviet republic back towards Moscow.

Thatprovoked mass protests in which more than 100 people were killed by police and which drove Yanukovich from office in February, leading to Kiev's loss of control in Crimea.

Police say that in a third protest in the city of Luhansk pro-Russia activists inside the main state security building have seized weapons.
There was no clear sign that further police operations were imminent in these two cities. "We hope the buildings occupied in Donetsk and Luhansk will soon be freed," acting president Oleksander Turchinov said.

Numbers of protesters involved appear to be small and Ukrainian nationalists, who believe the operations are being coordinated from Russia, say protesters occupying the buildings have been helped by the inaction of corrupt local police.

In Donetsk, steel-and-energy tycoon Rinat Akhmetov, Ukraine's richest man, is mediating with the protesters, but he may have complicated the plans of the authorities by publicly urging authorities not to use force as a solution.

But authorities may anyway have decided not to tempt action by Moscow and hold back and wait for the protests to fizzle out.