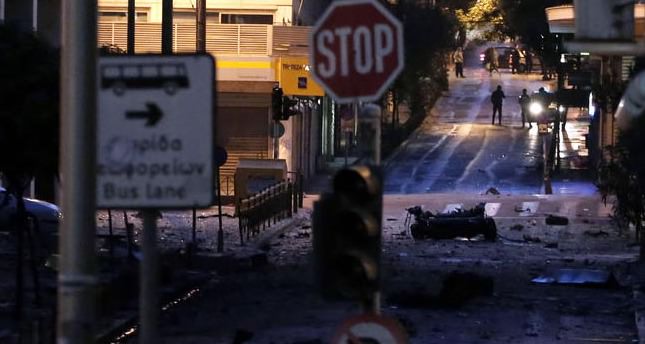 by Anadolu Agency
Apr 10, 2014 12:00 am
ATHENS — A car bomb has exploded outside Bank of Greece. The blast caused no injuries after unions staged a general strike against austerities. An explosion preceded by telephone warnings shook central Athens Thursday, leaving the remnants of a car strewn outside a Greek central bank building. It is near the office of Greece's international lenders.

A newspaper and a news website's bureau had received anonymous warning calls that 75 kilograms of explosives planted in a car was about to explode.

There was no immediate claim of responsibility, but police speculated that leftist or anarchist groups might have been behind the incident.

On Wednesday, the finance minister in Athens had announced that Greece would return to debt markets on Thursday and issue its first bonds since 2010. That's when it was excluded after revealing its public accounts had been falsified.