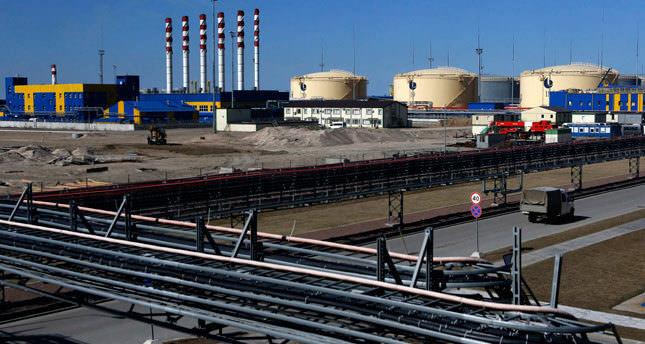 by French Press Agency - AFP
Apr 11, 2014 12:00 am
BRUSSELS — The EU executive urged Russia on Friday to honor its gas contracts after President Vladimir Putin warned Europe its supplies would be in peril unless it helped pay Ukraine's gas debt.

"Europe is a reliable gas client and we expect our suppliers to meet their commitments", said European Commission spokeswoman Pia Ahrenkilde Hansen in the latest chapter of the East-West tug of war over Ukraine.

Around a quarter of Europe's gas is bought from Russia, with half of that piped through Ukraine.

The spokeswoman also underlined that 70 percent of Russia's energy exports, including oil and gas, go to Europe, accounting for about half of the state's revenues.

Taking questions at a news briefing the day after Putin warned that Moscow was tired of accruing debt from the Western-backed leadership in Kiev, Commission officials were reassuring, saying there had been no disruption to Europe's gas supplies and that stocks currently were sufficient.

"All gas supplies are normal and stable and we expect all sides to respect their commitments," said the Commission's energy spokeswoman Sabine Berger.

In a letter to 18 EU nations, Putin warned that state gas firm Gazprom could be "compelled to switch over to advance payment for gas deliveries" and "completely or partially cease gas deliveries" if Ukraine fails to pay a $2.2-billion (1.6-billion-euro) debt.
Putin added that "Russia is prepared to participate in the effort to stabilise and restore Ukraine's economy" but only on "equal terms" with the EU.

The letter was sent to the leaders of France, Germany, Poland, Greece, Serbia, Austria, Croatia, Slovenia, Bulgaria and Italy, but not to the European Union as such.

Also on the list of the recipients, all of them countries that receive Russian gas through Ukraine pipelines, were Moldova, Romania, Turkey, Hungary, the Slovak Republic, Macedonia, the Czech Republic and Bosnia and Herzegovina.

U.S. State Department spokeswoman Jen Psaki condemned "Russia's efforts to use energy as a tool of coercion" and said the US was working with Ukraine to provide financing and help it find enough gas.