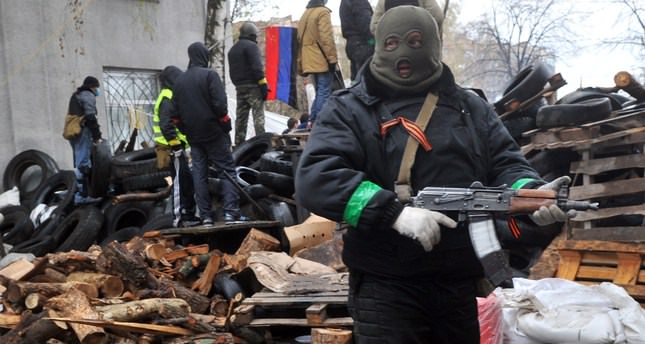 KIEV — Ukrainian government in Kiev yesterday sent special forces soldiers into the eastern city of Slaviansk after armed pro-Russian activists seized police buildings in the city the day before. The activists shot at the special units as they approached, said acting Interior Minister Arsen Avakov. "In Slaviansk an anti-terror operation has begun. Forces from all parts of the country were enlisted. May God be with us," wrote Avakov in the online network Facebook.

The State Department says that Kerry expressed his concern Saturday in a phone call with Russia's Foreign Minister Sergey Lavrov.
In a statement, the U.S. State Department said that Kerry made clear that if Russia does not take steps to de-escalate in eastern Ukraine and move its troops back from Ukraine's border, there would be additional consequences.

Russia's Itar-Tass news agency, citing the Foreign Ministry, said Kerry "could not give any concrete facts" to back his concerns.
Itar-Tass reported that Lavrov warned Kerry that if the Ukrainian government uses force against the protesters, it could derail international talks on the crisis set for next week.

NATO chief Anders Fogh Rasmussen also said yesterday he was "extremely concerned" about the escalation of tensions in east Ukraine, saying actions by uniformed, pro-Russian gunmen with military weapons pointed to an organized campaign to destabilize the region.

Drawing parallels with Crimea, the Ukrainian region Russia annexed last month after deploying forces there, he warned Moscow against further military interference. "We see a concerted campaign of violence by pro-Russian separatists, aiming to destabilized Ukraine as a sovereign state," Fogh Rasmussen said in a statement. "The reappearance of men with specialized Russian weapons and identical uniforms without insignia, as previously worn by Russian troops during Russia's illegal and illegitimate seizure of Crimea, is a grave development. "I call on Russia to de-escalate the crisis and pull back its large number of troops, including special forces, from the area around Ukraine's border," he said. "Any further Russian military interference, under any pretext, will only deepen Russia's international isolation," he warned.

Armed activists seized police buildings in cities across eastern Ukraine on Saturday, as tensions flared between the government in Kiev and pro-Russian separatists.

Hundreds of uniformed men occupied the police headquarters in Donetsk, an industrial city where most people speak Russian, and forced the police chief to resign, local authorities said. It followed the storming of a police station and a security services building in Slaviansk, some 100 kilometers north of Donetsk, with the activists demanding a referendum on independence from Kiev. The government in Kiev and Western nations have repeatedly accused Russia of destabilizing Ukraine and instigating separatism in the country's east.

Donetsk has been the center of massive protests against the new pro-Western leadership in Kiev. Hundreds of pro-Russian protesters continue to occupy the city's administration building, which they declared on Friday an independent "Peoples' Republic."
The protesters said they would defend themselves with bricks and Molotov cocktails against any attempts to evict them.

Acting Ukrainian premier Arseniy Yatsenyuk traveled to Donetsk on Friday and offered the protesters concessions in an attempt to ease the crisis. Yatsenyuk said that local administrations should no longer be appointed by Kiev and that referendums at the regional level should be allowed. He met regional officials, but did not speak to any of the protesters.

Under the current constitution, local governors and their administrations are appointed by the Ukrainian president and only national referendums are allowed. Yatsenyuk, however, did not say if it would be possible to conduct regional referendums without the consent of the government.

Kiev and the West condemned as illegal a referendum in Crimea last month, which resulted in the Black Sea peninsula's accession to Russia. The European Union and the United States responded by slapping travel bans and asset freezes on Russian officials.
EU foreign policy chief Catherine Ashton announced plans for a meeting in Brussels on April 17, among the EU, U.S., Russia and Ukraine, as part of "diplomatic efforts to deescalate the crisis in Ukraine and to find a political solution."