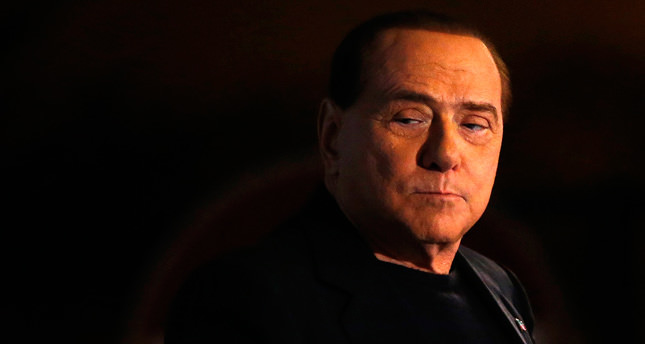 by German Press Agency - DPA
Apr 15, 2014 12:00 am
ROME — Silvio Berlusconi, a media mogul and three-time Italian prime minister, is to serve a one-year conviction for tax fraud as a community service worker in a senior home. However, he is embroiled in several other legal cases. Here is a summary.

Berlusconi was ordered to do community service on Tuesday, eight months after losing a final appeal against a four-year conviction for fraudulent accounting at his family's media firm, Mediaset.

He was also fined 10 million euros (13.8 million dollars), expelled from parliament and banned from public office for six years.

Three years were discounted due to a 2006 pardon law, leaving him to serve one year, which might be further cut by 45 days for good behavior.

The 77-year-old was not sent to jail, due to lenient sentencing laws for older people. Berlusconi continues to profess his innocence and
hopes the European Court of Human Rights could invalidate his conviction or at least shorten the public office ban.

Berlusconi has been on trial since February for bribing Sergio De Gregorio, a former senator who switched to Berlusconi's conservative side soon after 2006 general elections.

De Gregorio was sentenced to a 20-month-jail term in October, under a plea bargain agreement after confessing to receiving 3 million euros from Berlusconi. The former premier said it was a legitimate payment to a political ally.

Prosecutors see the alleged bribery as part of a plan to bring down the centre-left government of Romano Prodi, who won elections in 2006 by a wafer-thin margin. Prodi's coalition collapsed in 2008, paving the way for Berlusconi's return to power.

The case is likely to be dismissed before it reaches the final appeal stage, since the statute of limitations is set to expire in late 2015.

In June, Berlusconi was sentenced to seven years' imprisonment and given a lifetime ban on public office for soliciting sex from a minor and abusing his position to cover up the affair. The conviction has not been enforced, pending two rounds of appeals.

The so-called "bunga bunga" case centred around nightclub dancer Karima El Mahroug, also known as Ruby Heart Stealer. She was linked
to Berlusconi after he rang police in 2010, asking officers to release her after she had been held on suspicion of theft.

In their ruling, judges also accused Berlusconi of bribing defence witnesses, leading prosecutors to open a fresh bribery investigation
that may lead to a new trial against the former premier, his lawyers, El Mahroug and dozens of others.

Several showgirls told the court that they dined at Berlusconi's villa and performed lap dance routines and sexual acts in a special
"bunga bunga" room, and admitted to receiving monthly payments from him of at least 2,500 euros.

Berlusconi was last year given a one-year sentence for leaking information in hopes of hurting a political rival, former centre-left leader and sitting Turin Mayor Piero Fassino. An appeal court quashed the conviction in March, as the statute of limitations had expired.

In September, Berlusconi's family holding company, Fininvest, lost a final appeal against a court order to compensate Carlo De Benedetti,
a long-time business rival, to the tune of about 500 million euros.

Fininvest was punished because it bribed a judge in the early 1990s to rule in its favour in a takeover battle for the Mondadori
publishing house. The losing side was Carlo De Benedetti's CIR, owner of La Repubblica newspaper, one of Berlusconi's fiercest critics.

Magistrates have probed Berlusconi for Mafia links, but never found enough proof for a trial. However, a top appeals court is shortly due
to deliver a verdict on the alleged links between Cosa Nostra and Marcello Dell'Utri, a former business partner and lawmaker.

Dell'Utri, who escaped to Lebanon ahead of the ruling, and was arrested in Beirut on Saturday, is accused of having brokered the
Sicilian Mafia's protection of Berlusconi's family and business interests from the 1970s until the early 1990s.

Through Dell'Utri, Berlusconi employed Vittorio Mangano, a Mafia boss, as a stable worker in his villa outside Milan. The former
premier has always denied knowing about Mangano's connections to the mob.

There are unproven allegations that Berlusconi started his business career thanks to funds from the Mafia, channeled via Mangano. A
jailed mobster has also testified in court that Cosa Nostra approched Dell'Utri to seek political cover from Berlusconi in the early 1990s.

Berlusconi has also been prosecuted for: bribing tax officials; illicit financing to the Italian Socialist Party; paying British lawyer David Mills to testify in his favour; and other cases of alleged tax fraud.

Many of the cases were dropped thanks to laws passed when Berlusconi was premier. For example, his supporters decriminalized false
accounting, shortened statute of limitation deadlines and gave temporary immunity to people holding high office.