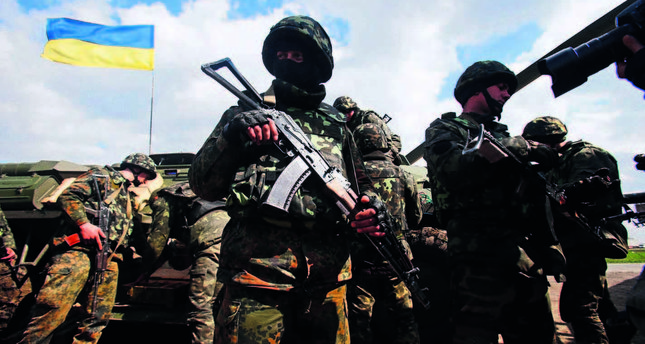 A long-awaited anti-terror operation to root out pro-Russian separatists in the east of the country was launched, Ukraine's acting President Oleksandr Turchynov told parliament

KIEV — Speaking at parliament yesterday, Ukraine's acting president, Oleksandr Turchynov said troops would be deployed to northern Donetsk near the Russian border. He did not provide precise details, saying only that it would be conducted in a "responsible" and "balanced" manner."

The goal is to protect citizens from terrorists who are trying to tear this country apart," Turchynov told parliamentarians.

The insurgents, demanding broader autonomy from Kiev and closer ties to Russia, continued occupying government, police and other administrative buildings in eastern cities despite the expiration on Monday of an ultimatum to lay down their weapons.

A spokesman for the separatists confirmed government forces opened fire on pro-Russian activists in the eastern city of Slavyansk, causing several injuries. He added that the so-called "self-defense forces" were preparing for a wider attack.

In Beijing, Russian Foreign Minister Sergei Lavrov said that any action against pro-Russian protesters by the Ukrainian government would undermine highly anticipated four-party talks in Geneva set for Thursday.

Lavrov denied Russia was seeking to undermine the talks between Ukraine, Russia, the United States and the European Union, Russia's Interfax news agency quoted him as saying.

He added claims that Russia was organizing anti-government protests in southeastern Ukraine were "nonsense," the agency reported.

"We appreciate Beijing's measured and impartial stance on the Ukrainian crisis, as well as China's manifest understanding of all its manifold aspects, including the historic ones," Lavrov said in an interview published on Tuesday by the official China Daily newspaper.
After meeting Lavrov, Foreign Minister Wang Yi said China welcomed talks in Geneva and was optimistic that a negotiated political solution will be found. "The justified rights and wishes of various regions and ethnic groups in Ukraine should be taken into account," Wang said.

U.S. Senator John McCain urged the U.S. government to supply weapons to the Ukrainian government. "They do not even have defensive armor ... they do not have so much equipment that they are badly in need of," he said in the Estonian capital, Tallinn. "And for us not to do that is absolutely inexcusable and shameful behavior and I am embarrassed that we do not give them what they need to defend their country."

NATO Secretary General Anders Fogh Rasmussen was due to discuss the impact of the Ukrainian crisis on European security with EU defense ministers in Luxembourg.

Czech Defense Minister Martin Stropnicky ruled out intervention by the military alliance but advocated a "firm" EU response given his country's proximity to the crisis.

He acknowledged the difficulty of finding a unified position in the bloc, saying that the "perception" of the crisis is "different in the south of Europe and in the north of Europe."

German Defense Minister Ursula von der Leyen called for "level-headedness" ahead of highly anticipated four-party talks. She said the meeting with Rasmussen would be "a clear sign" of unity.

Germany should remove a pair of World War II-era Soviet tanks standing on pedestals next to Berlin's Brandenburg Gate in protest at Russia's actions in Crimea and Ukraine, Germany's best-selling newspaper Bild said on Tuesday.

Launching a petition to get rid of the two green T-34 tanks that have stood in front of the Soviet war memorial since it was built in 1945, Bild and Berlin tabloid B.Z. urged readers to send letters of protest to parliament against the war symbols.

The memorial, where about 2,000 of the 80,000 Soviet troops were killed in the climactic battle of World War II for Berlin, is 200 meters west of the Reichstag parliament building.

A tourist attraction, it is one of three Soviet war memorials in Berlin.

Monday, U.S. President Barack Obama told Russian President Vladimir Putin that the United States preferred a diplomatic solution to the crisis in Ukraine but blasted Russia for taking actions that were not "conducive" to such a path. "The president made clear that the diplomatic path was open and our preferred way ahead, but that Russia's actions are neither consistent with or conducive to that," a senior administration official said about the call between the leaders.

Obama told Putin that Kiev made "real offers" to address concerns about the decentralization of powers to local governments in the country, the official said and added, "That is a matter for Ukrainians to decide… We have always and will continue to support an inclusive process." The official said the call, described as "frank and direct," came at the request of the Russians.
RELATED TOPICS