Tension up in Ukraine on the eve of talks 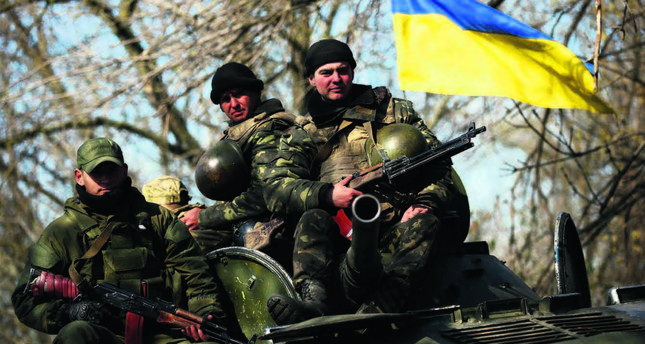 Pro-Russian separatists hoisted the Russian flag on Ukrainian army armored vehicles in eastern Ukraine yesterday, mocking the pro-Western Kiev government's attempt to reassert control on the eve of crucial talks in Geneva over the country's future

KRAMATORSK — Amid escalating rhetoric between Moscow and Kiev, the incident highlighted defiance by pro-Russian separatists who are undermining the central government efforts to push armed rebels out of captured buildings in 10 eastern towns without bloodshed.

Government troops had driven armored personnel carriers flying the Ukrainian flag into the town of Kramatorsk in the early morning after securing control of a nearby airfield from the rebels on Tuesday, prompting Russian President Vladimir Putin to warn of the risk of civil war.
Several of the same vehicles later rumbled into Slaviansk, just 15 km away, with Russian and separatist flags and armed men in motley combat fatigues on top. They stopped outside the town hall, which is occupied by separatists.

As they drove in waving, some people waved back and shouted: "Well done lads!" and "Russia" Russia!"

Overhead, a Ukrainian jet fighter carried out several minutes of aerobatics above the town's main square in a show of strength by Kiev's forces. A government official said the Ukrainian Defense Minister was travelling to Kramatorsk to try to clarify the situation.

The muscle-flexing and inflamed rhetoric heightened fears of violence after Moscowbacked gunmen occupied public buildings in 10 eastern towns and cities in the last week.

The Kiev government is seeking to reassert control slowly and without bloodshed before Thursday's Geneva meeting at which the Russian and Ukrainian foreign ministers are due to meet for the first time in the presence of the U.S. and the EU.

Russia, which has refused to recognize Ukraine's pro-Western government since Moscow-backed President Viktor Yanukovich was ousted by mass protests in February, sought to dramatize instability in its neighbor ahead of those talks.

Russian Foreign Minister Sergei Lavrov, speaking in Vietnam before heading to Geneva, said Kiev should listen to what he called the voice of the people of Ukraine and avoid force. "It is unacceptable to use (the armed) forces in eastern Ukraine," he told reporters in Hanoi.
The Ukrainian government launched what it called a "special operation" on Tuesday against separatist militia in the Russianspeaking east, although apart from a landing by airborne troops the action was limited and avoided casualties.

Soldiers disembarked from two helicopters at the airfield 10 km from Kramatorsk, where reporters heard gunfire that seemed to prevent an air force plane from landing.

There was no sign of violence in the area on Wednesday, but civilians watching the armored vehicles enter the town reflected the sharp political divisions in the mainly Russianspeaking southeastern Donbass region.

A group of about 30 local residents blocked the APCs briefly and tried to prevent them going through. Soldiers dismounted and pushed them away. One shot was fired in the air in a brief scuffle before the vehicles moved on.

The protesters managed to take away one hand-held radio and two rifle magazines from the soldiers.

In the main industrial city of Donetsk, at least 20 armed separatists occupied the city council building on Wednesday, a spokeswoman for the council said.

The deaths occurred as the military was retaking control of a small airport near the town of Kramatorsk, acting Ukrainian President Oleksandr Turchynov told parliament.

NATO said Wednesday it will deploy more air, sea and land forces in eastern Europe in response to the worsening crisis in Ukraine.

"Today we have agreed to a package of military measures," NATO head Anders Fogh Rasmussen said after a meeting of all 28 members of the transatlantic alliance. "We will have more planes in the air, more ships on the water...and more readiness on the land," he said, adding that NATO defense plans will be "reviewed and reinforced."

Rasmussen refused to detail what new forces would be deployed and where but said they would result in increased air sorties over the Baltic Sea, while additional ships would go there and to the eastern Mediterranean.

The decision will be implemented "immediately" and there will be more to come, he added.

Rasmussen stressed that NATO would stand by any ally against any threat, while the measures announced were entirely in keeping with international law and the alliance's commitment to deterrence.

He repeated calls for Russia "to be part of the solution" in Ukraine, to stop the destabilization of its Soviet era satellite, pull back its troops from the border and to make clear it "does not support" extremists.

Asked what bearing the decision could have on EU-US talks with Russia and Ukraine in Geneva on Thursday, Rasmussen said, "We have taken military steps which we think are necessary to enhance deterrence."

At the same time, "we agree that a political solution is the only way forward," he added.