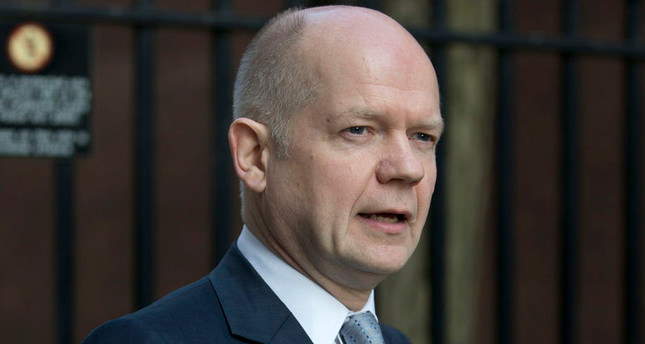 by AA Apr 17, 2014 12:00 am
LONDON — UK Foreign Secretary William Hague has warned that there will be "serious long-term consequences" if Russia continues to destabilize Ukraine.

Speaking in London at the Lord Mayor's Easter banquet, Hague said, "In recent days Russia has deliberately pushed Ukraine to the brink, and created a still greater risk of violent confrontation. We call on Russia to stop these actions and to condemn the lawless acts in eastern Ukraine."

Hague stated, "We are at a crucial moment in this crisis. Russia must choose whether it is open to diplomacy and de-escalation, and if it decides otherwise, we must be ready for a different state of relations with Russia in the next 10 years than in the last 20."

Hague added, "Ukraine can be a bridge between the East and the West and be able to have good relations with Russia. But that does not entitle Russia to send in its armed groups, thinly disguised, to spearhead the occupation of buildings in multiple Ukrainian cities, to try permanently to destabilize the country and dictate the terms of its constitution."

Hague warned, "My message to Moscow is that if anyone thinks they can do these things without serious long-term consequences they are making a grave miscalculation.

If we do not defend those principles in Ukraine, including over Crimea, they will be threatened elsewhere in Europe and around the world. We have to maintain strength and unity and confidence now, or our resolve could be tested even more severely in the future."

"That would be a grave mistake," Steinmeier told the German weekly Die Zeit.

"We have clearly signaled to Russia that after Crimea, any actions in eastern Ukraine, southern Ukraine or towards Moldova, would bring the developments to a new quality and would lead to the introduction of stage 3 sanctions."

European Union leaders agreed last month a three-stage plan of sanctions against Russia due to its annexation of Crimea. The third stage of punishments involves wide-scale economic penalties.

Steinmeier also dismissed criticisms directed against the EU for failing to stop Russia's incursion in Crimea and said that Europe's diplomatic efforts and policy of sanctions have already showed Russia that it has to bear consequences of its actions.

He cited recent losses in the Russian stock market, the ruble's continued fall and increased capital outflow as examples of the consequences incurred by Russia.

"I don't think that a master plan or a scenario is shaping the actions of Russia. There are plenty of indications that Russia is developing its positions according to situations," Steinmeier concluded.