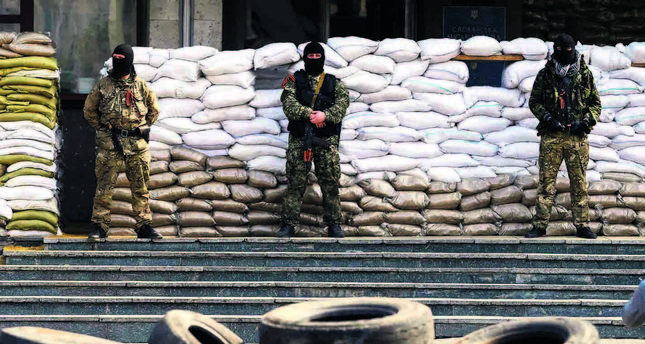 Armed pro-Russian separatists in eastern Ukraine said they were not bound by an international deal ordering them to disarm and were looking for more assurances about their security before leaving the public buildings they are holding.

SLAVIANSK — The agreement, brokered by the United States, Russia, Ukraine and the European Union in Geneva on Thursday offered the best hope to date of defusing a stand-off in Ukraine that has dragged East-West relations to their lowest level since the Cold War.

Ukraine said it was preparing a law to give the separatists amnesty although the drive to root them out would continue. The agreement requires all illegal armed groups to disarm and end occupations of public buildings, streets and squares but with the separatists staying put in the east and Ukrainian nationalist protesters showing no sign of leaving their - unarmed - camps in the capital's Maidan Square, it was not clear which side would be willing to move first.

Enacting the agreement on the ground though will be difficult, because of the deep mistrust between the pro-Russian groups and the Western-backed government in Kiev, which this week flared into violent clashes that killed several people. Russian President Vladimir Putin overturned decades of post-Cold War diplomacy last month by declaring Russia had a right to intervene in neighboring countries and by annexing the Black Sea peninsula of Crimea.

The move followed the overthrow of Ukraine's pro-Moscow president Viktor Yanukovich, after months of street protests prompted by his rejection of a trade deal with the EU.

The fact any deal was reached at all in Geneva came as a surprise, and it was not clear what had happened behind the scenes to persuade the Kremlin, which had shown little sign of compromise, to join calls on the militias to disarm. It rejects Ukrainian and Western accusations of orchestrating the gunmen.

The self-declared leader of all the region's separatists said he did not consider his men to be bound by the agreement.

Russian Foreign Minister Sergei Lavrov "did not sign anything for us, he signed on behalf of the Russian Federation," Denis Pushilin, head of the self-declared Donetsk People's Republic, told journalists in Donetsk, the regional capital.

First, he said, the prime minister and acting president who took power in February should quit their offices, as they took them over "illegally".

But Alexei, another separatist in Slaviansk acknowledged that the Geneva talks had changed the situation: "It turns out Vova doesn't love us as much as we thought." said Alexei, using a diminutive term for Putin, who is viewed by many of the separatist militias as their champion and protector.

In the capital, Kiev, people on the Maidan, the local name given to Independence Square which was the center of protests that eventually toppled Yanukovich, said the barricades would not come down until after the May 25 presidential election.

"People will not leave the Maidan. The people gave their word to stay until the presidential elections so that nobody will be able to rig the result. Then after the election we'll go of our own accord," said 56-year-old Viktor Palamaryuk from the western town of Chernivtsi.

"Nobody will take down our tents and barricades," said 34-year-old Volodymyr Shevchenko from the southern Kherson region. "If the authorities try to do that by force, thousands and thousands of people will come on to the Maidan and stop them." "We don't have any illegal weapons and so the call to disarm will not apply to us," said Right Sector spokesman Artem Skoropadsky. "We, the vanguard of the Ukrainian revolution, should not be compared to outright gangsters."

President Barack Obama said the meeting in Geneva between Russia, Ukraine and Western powers was promising but that the United States and its allies were prepared to impose more sanctions on Russia if the situation fails to improve. "There is the possibility, the prospect, that diplomacy may de-escalate the situation,"

Obama told reporters. "The question now becomes, will in fact they use the influence they've exerted in a disruptive way to restore some order so that Ukrainians can carry out an election and move forward with the decentralisation reforms that they've proposed," he said at the White House.

U.S. Secretary of State John Kerry said in Geneva that if by the end of the weekend there were no signs that pro-Russian groups were pulling back, there would be costs for Moscow, a reference to further EU and U.S. sanctions.

Pro-Russian militants control buildings in about 10 towns in eastern Ukraine after launching their operation on April 6.

In Luhansk, a militia member called Andrei said his group had no plans to withdraw: "Everything on the ground is the same as it was yesterday and the day before and the day before that. We're not leaving." Seeking to reassure its eastern allies, NATO announced it was sending warships to the Baltic, while the United States approved more non-lethal military support for Ukraine.