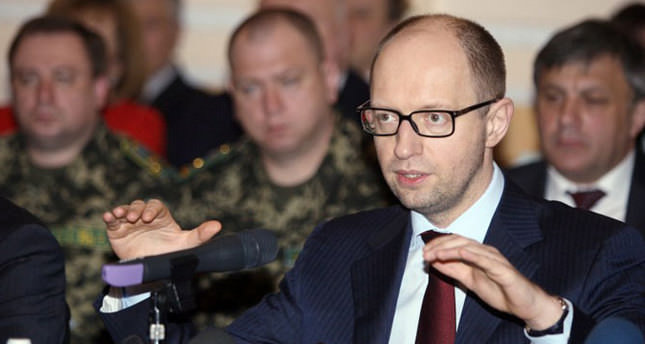 by AA Apr 19, 2014 12:00 am
KIEV — Ukraine's Prime Minister Arseniy Yatsenyuk has pledged "special status" for the Russian language and a broad decentralization of power in a bid to defuse pro-Moscow protests sweeping the east of the country.

In a joint TV address on Friday, Yatsenyuk and acting President Oleksander Turchinov called for national unity, urged people to refrain from violence and said they would support constitutional change, decentralizing more power to local councils, including over their official language - a key demand of Russian-speakers.

Yatsenyuk said another draft law had also been prepared to grant amnesty to any protesters who give up their weapons. He called on all political parties to back the amnesty bill when it comes to the parliament.

Turchynov also pledged that he would do his best to help the planned reforms envisaging more powers for the local authorities pass from the parliament.

The crisis in Ukraine began in November after Ukraine's former president Viktor Yanukovych opted to ditch a trade deal with the EU in favor of closer ties with Russia. Subsequent protests culminated in his ouster in February.