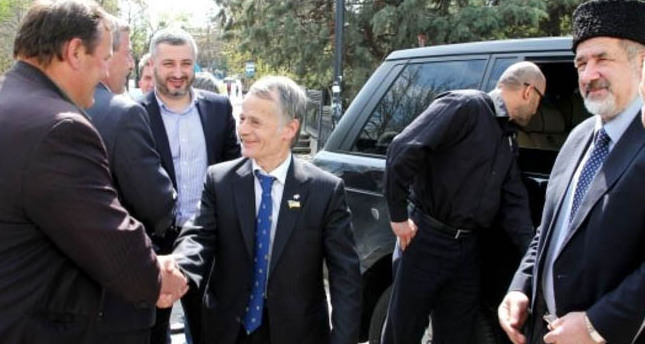 by Daily Sabah Apr 20, 2014 12:00 am
SIMFEROPOL, Ukraine — Tatar leader Mustafa Abdülcemil Kırımoğlu was welcomed with the Ukrainian and Tatar flags in Crimea on Saturday. This was Kırımoğlu's first visit following the annexation of Ukraine to Russia.

The customs officers at the Russian gate checked whether Kırımoğlu was listed among a list of banned people. Kırımoğlu headed for Simferopol accompanied by a convoy. He met with officers of the Tatar National Assembly. Kırımoğlu stated that he was surprised to see more cars with the Ukrainian flag than with the Tatar flag.

He further expressed that the soldiers were nice to him while he waited at the border. In his statement, Kırımoğlu said there was a woman who cried when she saw the Ukrainian flags. He referred to a comment made by Crimean Tatar National Assembly President Rıfat Çubarov: "Six months later everyone is going to cry when they see a Ukrainian flag."

Reports suggest that U.S. Vice President Joe Biden is paying a visit to Ukraine in the coming days. Kırımoğlu and Biden will meet in Kiev on April. 23.