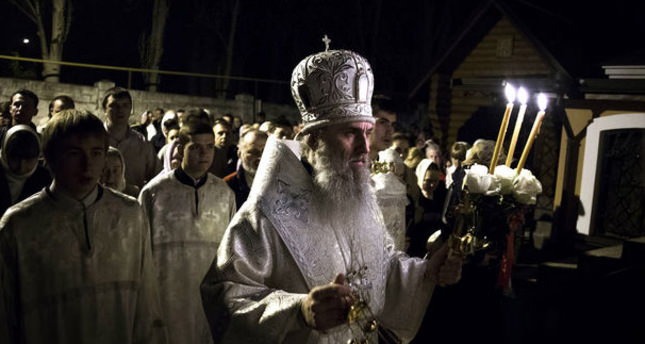 by reuters
Apr 20, 2014 12:00 am
KIEV - As Russians and Ukrainians celebrated Easter on Sunday with their nations locked in conflict, the head of Ukraine's Orthodox Church condemned Russian "aggression" and said "evil" would be defeated.

"God cannot be on the side of evil, so the enemy of the Ukrainian people is condemned to defeat," Patriarch Filaret said in his Easter message. "Lord, help us resurrect Ukraine."

It was a strikingly outspoken intervention at a time when many Ukrainians said they were praying for peace with their former Soviet neighbor on a day when Christians celebrate Jesus rising from the dead after his crucifixion.

The head of the Russian Orthodox Church, which still has the loyalty of many congregations across Ukraine despite political strains between the two countries, called for peace.

Following an uprising in Kiev that overthrew the Kremlin-backed Ukrainian president in February, Russia annexed Crimea last month and pro-Moscow separatists are now occupying public buildings in the Russian-speaking east of the country and pressing for their regions also to be ruled from Moscow.

Ukraine gave up Soviet nuclear weapons based on its territory in 1994 in a treaty under which Russia, along with the United States and Britain, guaranteed Ukrainian sovereignty.

The Ukrainian government and its Western allies accuse Russian President Vladimir Putin of fomenting unrest - something he denies. International monitors hope to start implementing an agreement to disarm Ukrainian militants in the coming days.