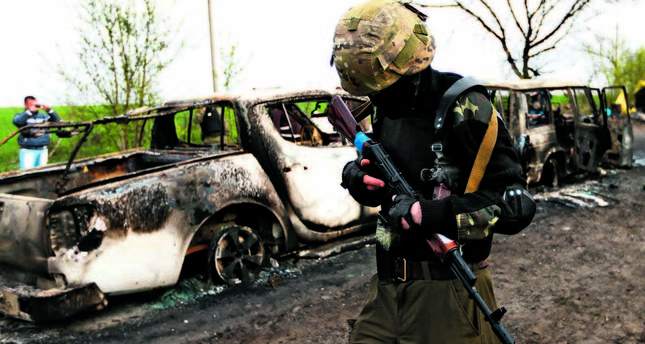 A shootout at a checkpoint set up by pro-Russian insurgents in eastern Ukraine left one person dead, according to the Ukrainian Interior Ministry, while Russia said the number of dead was at least four

KIEV — Deadly gunfight in a town in restive eastern Ukraine shattered a fragile Easter truce, with Russia declaring itself "outraged" at the return to violence in the crisis-hit former Soviet republic.

Three pro-Russian militants and one attacker were killed in a firefight at a roadblock close to the separatist-held town of Slavyansk, a local pro-Kremlin rebel leader, Vyatcheslav Ponomarev, said but Ukrainian officials, without providing details, said that at least one person was killed and three wounded in the incident.

Vladimir, a masked 20-year-old pro-Russian rebel who was at the barricade, told AFP: "Four cars pulled up to our roadblock around 1 a.m. We wanted to conduct a check, and then they opened fire on us with automatic weapons."

He said there were around 20 attackers, and confirmed the three rebel deaths, but was not sure of casualties on the other side.
An AFP photographer saw the bodies of two dead militants laid out in a truck near the scene.

The identity of the assailants, who escaped before militant reinforcements arrived, was not known.

The Ukrainian interior ministry confirmed there was an "armed clash" but gave a toll of one dead and three injured. It said police were investigating.

Western-backed authorities in Kiev had announced they were suspending military operations to oust the rebels over Easter, which ends Monday.

The last deadly clash was last Thursday, when three pro-Russian militants were killed by Ukrainian soldiers when they tried to attack a military base in the southeast port city of Mariupol.

Russia's Foreign Ministry quickly seized upon the latest violence, saying in a statement soon after Sunday's Slavyansk gun battle that Moscow was "outraged at this provocation by the fighters."

It blamed the deaths of what it called "innocent civilians" on the Right Sector, an extreme-right group that was at the vanguard of protests that ousted Ukraine's pro-Kremlin president Viktor Yanukovych in February. Locals, it said, had found the attackers' cars containing weapons, maps and Right Sector symbols.

Moscow urged Kiev to abide by an accord signed in Geneva on Thursday by Ukraine, Russia, the United States and the European Union calling for "illegal armed groups" to lay down their weapons and end the occupation of public sites.

That agreement has turned into a point of contention between Russia and the U.S. With pro-Kremlin rebels refusing to comply with its terms, Washington has been ratcheting up pressure on Moscow, which it sees as pulling the strings in the Ukrainian insurgency.

U.S. President Barack Obama has threatened to impose more sanctions on Moscow if no de-escalation occurs. He also is preparing to send ground troops to Ukraine's neighbor Poland, according to a report in The Washington Post newspaper.

Russia already has tens of thousands of troops massed on Ukraine's eastern border in what NATO fears is a state of readiness to invade.

In the midst of the Cold War-style tensions, the Organization for Security and Cooperation in Europe (OSCE), which is tasked with verifying the implementation of the Geneva accord, said it was sending a high-ranking team to east Ukraine on Sunday to join its monitors there.

The sudden spike in tensions put paid to attempts by some ordinary Ukrainians to embrace Easter as a time of peace across their country.

That effort was already undermined overnight when the Orthodox religious leaders in Kiev and Moscow traded barbs over the situation.

Kiev's Patriarch Filaret thundered to the faithful that Russia was an "enemy" whose "attack" on Ukraine was doomed to failure because it was evil and contrary to God's will.

In Moscow, the patriarch of the Russian Church, Kirill, led a prayer for Ukraine in which he called on God in turn to put "an end to the designs of those who want to destroy Holy Russia." Kirill said Ukraine was "spiritually and historically" at one with Russia, even if politically separate, and he prayed it would soon have leaders who were "legitimately elected".

Russia refuses to recognize the authority of Kiev's government, which was installed in the wake of the February ouster of pro-Kremlin president Viktor Yanukovych after months of bloody street demonstrations. In comments to be broadcast on U.S. television Sunday, Ukrainian Prime Minister Arseniy Yatsenyuk lashed out at Russian President Vladimir Putin for having a "dream to restore the Soviet Union". Putin himself has varied his public stance on the crisis, between threatening -saying he "hoped" he would not have to invade Ukraine- to conciliatory, saying "no obstacle" existed to better relations with the West.

Washington has warned Moscow that Ukraine is in a "pivotal period." U.S. Secretary of State John Kerry told Russian Foreign Minister Sergei Lavrov that "full and immediate compliance" was needed within "the next few days." U.S. Vice President Joe Biden is scheduled to make a visit to Kiev on Tuesday. Meanwhile, a poll conducted by Kiev's Institute for International Sociology suggested just over half of the Ukrainians in the eastern Donetsk region were against coming again under Russian rule, while over a quarter were in favor.
RELATED TOPICS