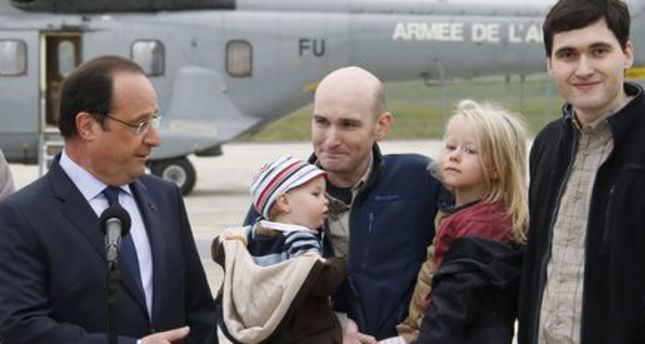 by AA Apr 21, 2014 12:00 am
PARIS — Nicolas Henin, one of four French journalists released after 10 months of captivity in Syria, has said they owe their freedom to Turkey.

Henin's comments on Sunday came after he and fellow journalists Edouard Elias, 23, Didier Francois, 53, and Pierre Torres, 29, arrived earlier in the day at a military base in northern France from Turkey, after being held in captivity in Syria since June.

Speaking on French television channel France 24, Henin said: "Our captors had directed us to the Turkish military base ... We were released thanks to Turkey. We thank Turkey and the Turkish army."

Henin, who was working for Le Point magazine at the time of his capture, said the group once attempted to escape, but failed, and their captors had constantly changed their location.

No groups have claimed responsibility for the abductions.