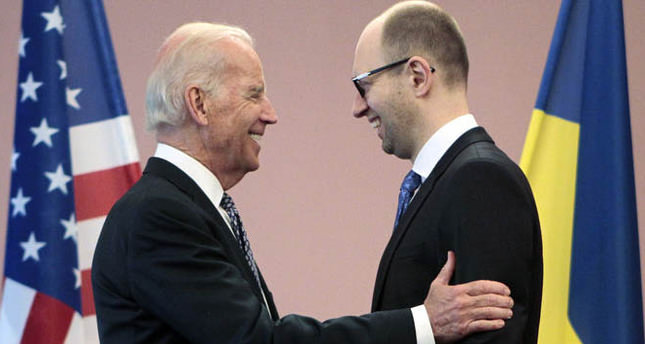 by Anadolu Agency Apr 22, 2014 12:00 am
KIEV, Ukraine — As the crisis in Ukraine shows no signs of easing, U.S. Vice President Joe Biden promised support for Ukraine and stressed that the United States won't recognize Russia's annexation of Crimea.

"Ukraine is and must remain one country," he said in Kiev on Tuesday at a news conference with Prime Minister Arseniy Yatsenyuk. Biden also met with acting President Oleksandr Turchynov and lawmakers during his trip to Ukraine.

"No nation has the right to simply grab land from another nation," Biden said. "We will never recognize Russia's illegal occupation of Crimea."

Biden called on Russia to "stop supporting men hiding behind masks and unmarked uniforms sowing unrest in eastern Ukraine." He warned of additional sanctions if such "provocative behavior" does not end.

Ukrainian and U.S. officials say they think Russian special forces are in the region and are behind efforts to seize government buildings and generally promote unrest.

"You will not walk this road alone. We will walk it with you," Biden told Yatsenyuk.