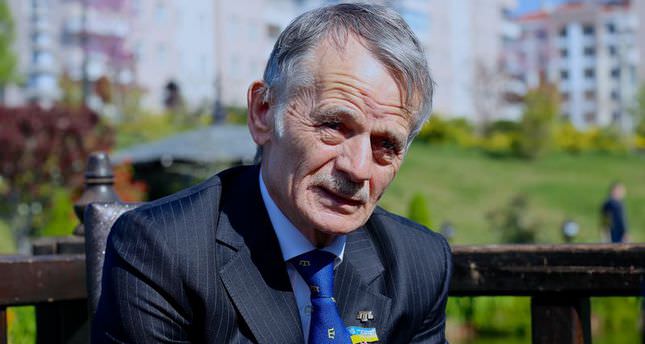 by reuters
Apr 23, 2014 12:00 am
KIEV — Russia yesterday banned Mustafa Abdülcemil Kırımoğlu, a prominent Crimean Tatar political leader and Ukrainian legislator, from entering Crimea for five years, according to the region's Tatar community assembly. In an online statement, the Mejlis (Congress) of the Crimean Tatar People said Kırımoğlu, a member of the Ukrainian parliament and former chairman of the Mejlis, was handed a notice banning him from Russia for five years after he crossed back to mainland Ukraine after a weekend in Crimea. The Russian Parliament annexed Crimea last month from Ukraine and granted citizenships to all its residents in a move that was widely condemned by world leaders.

It carried a photograph of a typed sheet of paper, unsigned and without letterhead, headed, "Notification of non-permission of entry to the Russian Federation." It said "Kırımoğlu...a citizen of Ukraine" was denied entry to Russia on the basis of federal law for five years until April 19, 2019.

The Mejlis did not say who issued the notice. Russia has yet to establish a full international land border crossing out of Crimea, which Ukraine, with broad backing abroad, regards as part of its territory. Since shortly after the overthrow of Ukraine's Kremlin-backed president in Kiev, local pro-Russian militias in Crimea have been checking traffic from the mainland.

The Mejlis action came one day after Russian President Vladimir Putin made a goodwill gesture toward the Crimean Tatars, many of whom wanted to remain Ukrainian, by signing a decree ruling their mass deportation by Stalin in the 1940s illegal and guaranteeing autonomous rights for them and other minorities.

A Turkic-speaking, Muslim community long present along the Black Sea, Tatars make up about 12 percent of Crimea's 2 million population. Deported to Central Asia on suspicion of aiding Nazi German invaders during World War II, they began to return in the 1980s and in large numbers after the collapse of the Soviet Union in 1991.

The Mejlis was recognized by the Ukrainian state in the 1990s as a representative body for the Tatars. Kırımoğlu, 70, was its chairman from its foundation in 1991 until last year.

It quoted Kırımoğlu calling it "an indication of what kind of 'civilized' state we are dealing with." Last month, he told Putin that annexing Crimea would breach international law.

There has been tension between Tatars in Crimea and pro-Russian separatists. On Monday, the Mejlis said unidentified men in camouflage forced their way into its building, which was largely empty for a holiday, and took down a Ukrainian flag.