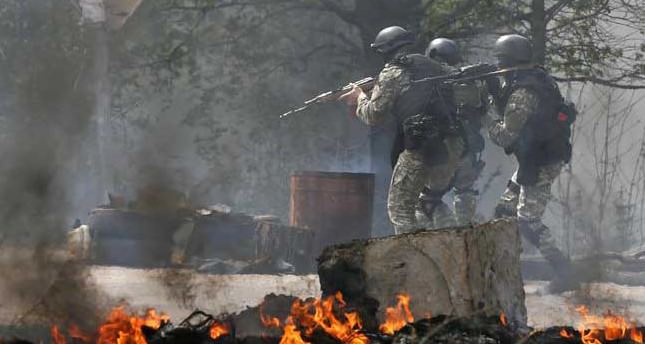 by Apr 24, 2014 12:00 am
KIEV — Ukrainian forces killed up to five pro-Moscow separatists in the east of the country, the Interior Ministry said on Thursday.

Russian President Vladimir Putin warned of "consequences" if Kiev used the army against its own people.

Interior Ministry forces backed by the army removed three checkpoints manned by armed groups in the separatist-controlled town of Slaviansk, the ministry said in a statement.

"During the armed clash up to five terrorists were eliminated," it said, adding that one person had been wounded on the side of government forces.

Under an international accord signed in Geneva last week, illegal armed groups, including the rebels occupying about a dozen public buildings in the largely Russian-speaking east, are supposed to disarm and go home.

However, the Kremlin, which has deployed tens of thousands of troops on Ukraine's border, maintains it has the right to protect Russian-speakers if they come under threat, a reason it gave for annexing the Crimean peninsula from Ukraine last month.

Washington accuses Moscow of fomenting unrest in the east. Russia denies this and counters that Europe and the United States are supporting an illegitimate government in Kiev.