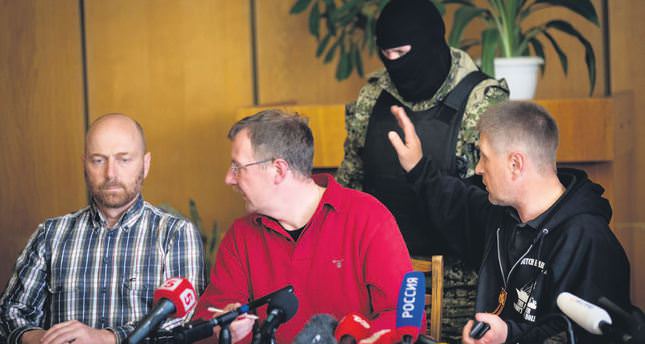 Negotiations for the release of the OSCE observers taken hostage by pro-Russian militants are ongoing, while separatist officials say they are seen as prisoners of war

SLAVIANSK — The leader of the international observers detained by pro-Russian separatists in the east Ukrainian city of Slaviansk said all members of the group were in good health, but they were anxious to be allowed to go home soon. Appearing in public yesterday for the first time since they were taken hostage three days ago by pro-Russian militias, seven officers from the observer team and their translator were brought into a room of waiting journalists in the separatist held city administration building.

Guards in camouflage fatigues and balaclavas, carrying Kalashnikov rifles, were also in the room as journalists spoke to the observers, who were in Ukraine under the auspices of the Organization for Security and Cooperation in Europe (OSCE). Colonel Axel Schneider, who was leading the observer mission, said the group came to Slaviansk without weapons and were there strictly in line with their mandate under OSCE rules, to carry out military verification work. "We were accommodated in a cellar. We had to set up conditions for ourselves," said Schneider, describing what happened after they were seized. "Since yesterday we've been in a more comfortable room with heating. We have daylight, and an air conditioner." Schneider, who had a shaven head, a closely-cropped beard and was wearing a plaid button-down shirt, told reporters he had "not been touched," and that there had been no physical mistreatment of the group. The group sat side by side at a long table in front of the reporters, looking sombre and serious, but otherwise well. "All the European officers are in good health and no one is sick," Schneider said.

He said the separatist de factor mayor of Slaviansk, Vyacheslav Ponomaryov, had guaranteed the group's safety. He said he believed the mayor's promise. Ponomaryov appeared with the detained men at the news conference. "We have no indication when we will be sent home to our countries," Schneider said. "We wish from the bottom of our hearts to go back to our nations as soon and as quickly as possible."

Meanwhile, pro-Russian Ukrainian rebels say their captives are "prisoners of war." He added that the group's driver, who was seized with them on Friday, had been released, bringing the number of detainees in the OSCE military verification mission to 12: eight Europeans and four accompanying members of the Ukrainian army. "They are prisoners of war," Ponomaryov repeated several times. "In our town, where a war situation is going on, any military personnel who don't have our permission are considered prisoners of war." He repeated that they would only be freed in exchange for Kiev's authorities releasing arrested pro-Moscow militants.

And he stressed that the rebels did not consider the detained men part of the OSCE monitoring mission deployed in Ukraine.
The OSCE headquarters in Vienna has said the military verification mission is a separate unit headed by German command. "I can't say that they aren't taking sides in events here, because the U.S. and NATO are delivering weapons and sending [military] trainers" to Kiev, and foreign private security firms were active, Ponomaryov claimed. Ponomaryov, who was wearing a pistol in a holster and escorted by two armed bodyguards, did not say why the seized group were being kept in the town hall instead of the SBU secret services building the rebels are also occupying in the town. He did claim, though, that the OSCE observers "are not our hostages, they are our guests." U.S. President Barack Obama on Sunday said the U.S. and Europe must join forces to impose sanctions on Russia and prevent it from destabilizing Ukraine.

Washington and Brussels are expected, possibly as early as Monday, to name new people and firms close to Russian President Vladimir Putin who will be hit by punitive measures, but there is no consensus yet on wider economic sanctions. Speaking during a visit to Malaysia, Obama said any decision on whether to slap sanctions on sectors of the Russian economy at a later time would depend on whether the U.S. and its allies could find a unified position on how to proceed.

"We're going to be in a stronger position to deter Mr. Putin when he sees that the world is unified and the United States and Europe are unified rather than this is just a U.S.-Russian conflict,"

Obama told reporters. The stand-off over Ukraine, an ex-Soviet republic of about 45 million people, has dragged relations between Russia and the West to their lowest level since the end of the Cold War. Obama said Russia had not "lifted a finger" to get pro-Russian separatist rebels in Ukraine to comply with an international agreement to defuse the crisis. "In fact, there's strong evidence that they've been encouraging the activities in eastern and southern Ukraine," he said. Washington is more hawkish on further sanctions than Brussels, and this has caused a degree of impatience among some U.S. officials with the European response. Many European countries are worried about the risks of imposing tougher sanctions, not least because Europe has extensive business ties with Moscow and imports about a quarter of its natural gas from Russia. British Foreign Secretary William Hague said that in the coming days there would be "an expansion of existing sanctions, measures against individuals or entities in Russia."