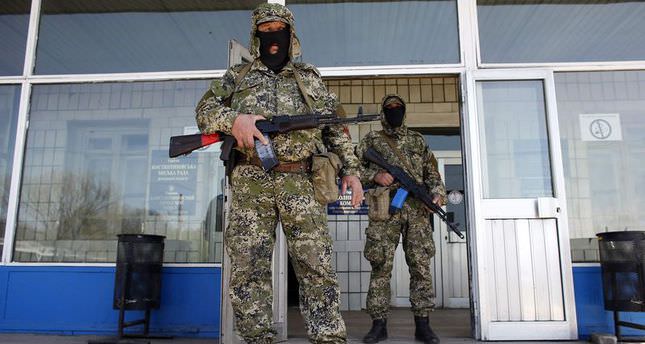 by Associated Press
Apr 28, 2014 12:00 am
KOSTYANTYNIVKA, Ukraine— Masked and armed militants on Monday seized a council building in yet another city in eastern Ukraine, expanding their onslaught in the region.

The building housing the city hall and the city council in Kostyantynivka, just 160 kilometers (100 miles) from the Russian border, was seized by masked men who carried automatic weapons. About 15 armed men, some wearing a symbol of the pro-Russian movement, guarded the building.

Kostyantynivka is just 35 kilometers south of Slovyansk which has been in insurgents' hands for more than three weeks now.

Since November, Ukraine has been engulfed in its worst political crisis since the 1991 fall of the Soviet Union. Months of anti-government protests in the capital Kiev culminated in President Viktor Yanukovych fleeing to Russia in late February.

Obama said the targets of the sanctions would include high-technology exports to Russia's defense industry. The full list of targets will be announced by officials in Washington later Monday and are also expected to include wealthy individuals close to Putin.

The European Union is also planning more sanctions, with ambassadors from the bloc's 28 members to meet Monday in Brussels to add to the list of Russian officials who have been hit by asset freezes and travel bans.