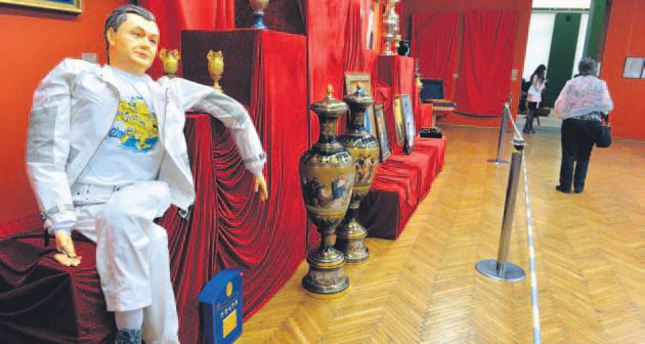 by Apr 28, 2014 12:00 am
KIEV — Giant crocodile skins, kitsch ornaments and a huge portrait of the owner dressed as a race car driver are just some of the items from deposed Ukrainian President Viktor Yanukovych's opulent palace that went on display in a new show in Kiev Saturday.

When Yanukovych fled in panic in February amid deadly protests against his rule, thousands of Ukrainian demonstrators overran his luxury private estate some 15 kilometers from Kiev and were shocked by what they saw. Mansions dripping with gold and marble, a private golf course and a zoo boasting a collection of rare pheasants were among the sights that sparked awe and anger from the protesters in a country where the average monthly salary is about $250 (TL 532). Now several hundred of the items, ranging from tasteless bling to the downright bizarre, have gone on show at the National Art Museum of Ukraine in central Kiev. Yanukovych's image is everywhere: on plates, busts and scores of portraits in every possible setting and pose.

There is even a framed certificate stating that Yanukovych went to the trouble of having a star named after him.