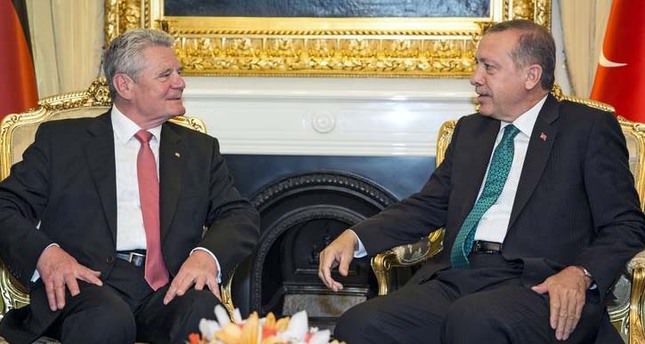 During Tuesday's AK Party group meeting speech Erdoğan said, "We had a two-hour meeting with Gauck yesterday (April 28). He did not talk with us in the way he talked at METU [Middle East Technical University] conference." Erdoğan called Gauck attitude as 'disappointing'.

German President Joachim Gauck had official talks with his Turkish counterpart Abdullah Gül and Erdoğan on Monday, as part of his


four-day visit to Turkey which started on Saturday.

After talks with Turkey's top officials Monday, in a conference at Ankara's METU Gauck said "The current developments in Turkey horrify me," said, referring the recently approved laws on the Internet, judiciary and those extending the scope of Turkey's intelligence agency.

Gauck noted that his expressions should not be taken as interference into Turkey's domestic affairs. However Erdoğan commented that Turkey's officails suffered enough from these sorts of statements from foreign politics.

Referring to NSU cases in Germany, Erdoğan said "Those who cannot account for the death of eight Turkish immigrants by racists, should not give advice to Turkey."

The mystery of the murders of eight Turks, one Greek immigrant and a German policewoman in Germany between the years 2000-2007 were not solved until 2011.

While German police long sought suspects among the Turkish community, even families of the victims, it was revealed in 2011 that the 'Zwickau terror cell', a group of neo-Nazi extremists, calling themselves the National Socialist Underground (NSU) were behind the murders.

The trial into the killings is still ongoing in a Munich court.