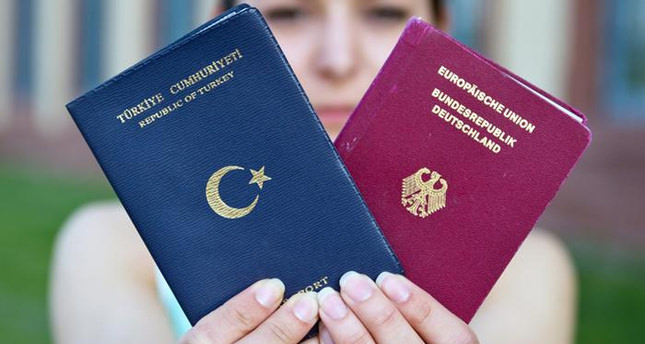 by AA Apr 29, 2014 12:00 am
ANKARA — Dual citizenship for the half a million children of immigrants in Germany is guaranteed says Germany's Integration Minister, referring to a draft law on its way through the German Parliament which will allow young people to have dual citizenship if they were born in Germany and lived there for at least eight years or attended school for six years until their 21st birthday.

The move will benefit the large Turkish community of around three million people in Germany.

Aydan Özoğuz was interviewed by Anadolu Agency on Monday during her visit to Turkey within German President's delegation.

When asked about the right for children to learn mother-tongue languages in German schools, Özoğuz said the education right has been already given in some German states.

"We are still working on the issue of each child to get education in his father's or mother's language," she added.

"However, there are children from 130 different nationalities in Germany," Özoğuz said. "Because Turkish-origined people have the larger population, Turkish will have priority among Russian, Spanish, Italian and French."

Özoğuz also worked for the investigative committees uncovering operation of neo-Nazi extremists, involved in murders of nine people, eight of them of Turkish descent and one Greek man. The murders occured in Germany between the years 2000-2007 but were not solved until 2011.

While German police long sought suspects among the Turkish community, even families of the victims, it was revealed in 2011 that the 'Zwickau terror cell', right wing group calling themselves the National Socialist Underground (NSU) were behind the murders.

However, NSU case has been ongoing in Germany for more than one year, and the German court could not pass sentence on the case.

Özoğuz said some changes to state agencies and police departments will be brought in.

"People of Turkish origin should be given jobs at the state agencies in order to avoiding one-sided thinking," said Özoğuz.

"For sure, we will take some security measures in some places, and the places will be determined with Turkey," said Özoğuz, and she added that you should be careful for the conditions of voting in democracies.