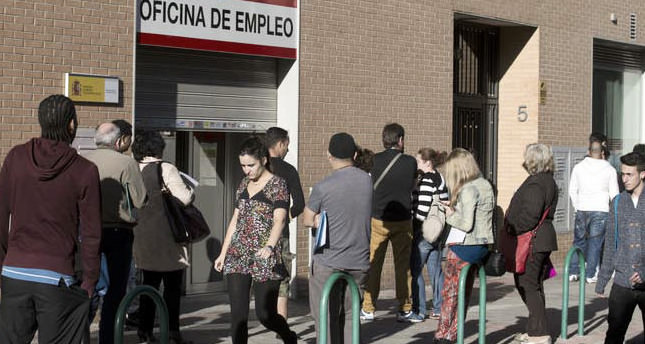 by Daily Sabah Apr 29, 2014 12:00 am
MADRID — Spain's unemployment rate climbed to nearly 26 percent in the first quarter of 2014, official data showed yesterday, as millions searched in vain for a job in a sluggish recovery from recession. Despite emerging gingerly from a two-year downturn in mid-2013, figures show Spain is still failing to significantly dent one of the highest jobless rates in the industrialized world.

The unemployment rate climbed to 25.93 percent in the first three months of 2014, up from 25.73 percent in the previous quarter, the National Statistics Institute said. It was not all bad news for the eurozone's fourth-largest economy. The jobless queue shrank fractionally, by just 2,300 people, to 5.93 million.

But the ranks of the unemployed nevertheless made up a bigger share of the total as 187,000 people dropped out of the workforce, many of them fleeing the country or simply giving up the search for a job. Unemployment remains a daunting challenge for Prime Minister Mariano Rajoy's conservative government, which has made job creation a priority.

The implosion of a decade-long property bubble in 2008 flooded the country in debt, tipped the economy into a double-dip recession and wiped out millions of jobs. By the first quarter of 2013, the unemployment rate had soared to an unprecedented 26.94 percent, according to latest official figures. Despite signs of a gathering economic recovery, however, no-one is predicting a return any time soon to the pre-crisis days in 2007 when Spain enjoyed a jobless rate of less than 8 percent.

The Bank of Spain has forecast an unemployment rate of 25 percent this year and 23.8 percent in 2015. Spain's total economic output grew at the fastest rate in six years in the first quarter of this year, rising by 0.4 percent on a quarterly basis, the central bank has estimated.