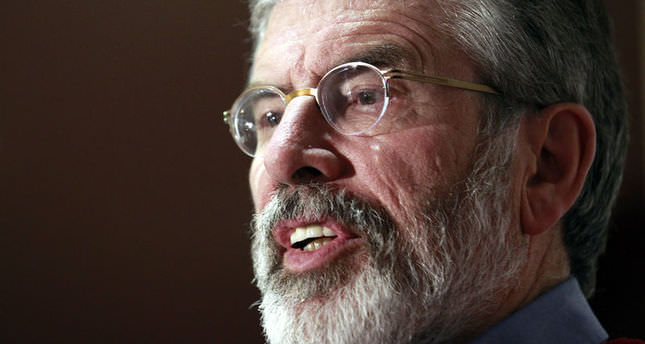 by Associated Press Apr 30, 2014 12:00 am
Police in Northern Ireland arrested Sinn Fein party leader Gerry Adams on Wednesday on suspicion of involvement in the Irish Republican Army's 1972 abduction, killing and secret burial of a Belfast widow.

Adams, 65, confirmed his own arrest in a prepared statement and described it as a voluntary, prearranged interview.

Police long had been expected to question Adams about the 1972 killing of Jean McConville, a 38-year-old mother of 10 whom the IRA executed as an alleged spy. According to all authoritative histories of the Sinn Fein-IRA movement, Adams served as an IRA commander for decades, but he has always denied holding any position in the outlawed group.

"I believe that the killing of Jean McConville and the secret burial of her body was wrong and a grievous injustice to her and her family," Adams said. "Well publicized, malicious allegations have been made against me. I reject these. While I have never disassociated myself from the IRA and I never will, I am innocent of any part in the abduction, killing or burial of Mrs. McConville.

" Reflecting the embarrassment associated with killing a single mother, the IRA did not admit the killing until 1999, and her unmarked grave was discovered only by accident near a Republic of Ireland beach in 2003.

Adams was implicated in the killing by two IRA veterans who gave taped interviews to researchers for a Boston College history archive on the four-decade Northern Ireland conflict. Belfast police took legal steps to acquire the interviews, parts of which already were published after the 2008 death of one IRA interviewee, Brendan Hughes. The researchers fought unsuccessfully to avoid handover of the tapes of the second IRA interviewee, Dolours Price, who died last year.
Last Update: Apr 30, 2014 11:49 pm
RELATED TOPICS