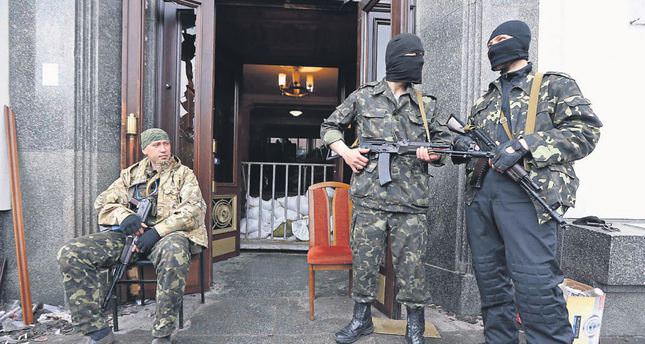 Masked gunmen in military fatigues took control of a government building in another Ukrainian town yesterday, as pro-Russian separatists tightened their grip on a swathe of the country's industrial east largely unopposed by police. Local media reports said the gunmen turned up at first light and were later seen by a Reuters photographer to be controlling entry to the building in the town of almost 300,000 people. They refused to be photographed. The heavily armed men wore the same military uniforms without insignia as other so-called "green men" who have joined pro-Russian protesters with clubs and chains in seizing control of a string of towns across Ukraine's Donbass coal and steel belt abutting the border with Russia.

A police official in nearby Donetsk, the provincial capital where separatists have declared a "People's Republic of Donetsk," said separatists were also in control of the Horlivka police division, having seized the regional police HQ earlier in April.

Wednesday's takeover followed the fall of government buildings on Tuesday further east in Luhansk, the capital of Ukraine's easternmost province, driving home just how far control over the densely populated region has slipped from the pro-Western central government in Kiev. "They've taken them. The government administration and police," the police official said of Horlivka.

The town sits just north of Donetsk, where mainly Russian-speaking separatists have called a referendum on secession for May 11.
Many hope to follow Crimea's break from Ukraine in late March and subsequent annexation by Russia, following the overthrow of Ukraine's then Moscow-backed President Viktor Yanukovich in late February in a tug-of-war between the West and Russia over the strategic direction of the former Soviet republic.

The Donbass region is home to giant steel smelters and heavy plants that produce around a third of Ukraine's industrial output. An armed uprising began there in early April, with Kiev almost powerless to respond for fear of provoking an invasion by tens of thousands of Russian troops massed on the border.

Oleksandr Turchynov, Ukraine's acting president until an election on May 25, reiterated on Wednesday that police were incapable of reasserting control in the region. "Our main task is to prevent the terrorist threat from spreading to other regions of Ukraine," he told a meeting of regional governors in Kiev.

"The Russian leadership is doing everything to prevent the election. But the election will take place on May 25," he said.

Speaking about the detention monitors from the Organization for Security and Cooperation in Europe (OSCE), German Chancellor Angela Merkel said that, the release of the OSCE monitors would be a sign of Russia's move to ease the crisis in Ukraine. "This would be a signal of de-escalation,"Merkel said, but added that Russia needed to do more, including helping to ensure that Ukraine held planned presidential elections on May 25.She said the international community had no reason to doubt its current strategy of introducing sanctions against Russia.The crisis in Ukraine had implications for Asia, said visiting Japanese Prime Minister Shinzo Abe. "It's a global problem," he said.

Merkel also has threatened Russia with further sanctions. Berlin and its Western partners are keeping all lines of communications open with Moscow, Merkel said. "If all this does not bear fruit, we must not shy away from accepting that further sanctions are necessary," she said at a joint press conference in Berlin with visiting Japanese Prime Minister Shinzo Abe.

The EU is ready to provide economic aid to Ukraine in cooperation with the International Monetary Fund, European Council President Herman Van Rompuy said on Wednesday. "Of course we need a fully fledged agreement with the IMF, but the European Union is ready for macro-financial aid in the framework of the overall package. So we are ready to support Ukraine," he told reporters after meeting in Prague with Czech Prime Minister Bohuslav Sobotka. U.S. Secretary of State John Kerry accused Russia of seeking to change the security landscape of Eastern and Central Europe at a think tank in Washington on Tuesday.

Speaking at the Atlantic Council think tank, John Kerry said, "What Russia's actions in Ukraine tell us is that today Putin's Russia is playing by a different set of rules."

Kerry added that Moscow is pursuing a "complete fiction" through its actions in Ukraine and that the ongoing crisis is a "wakeup
call" for America and its European allies.