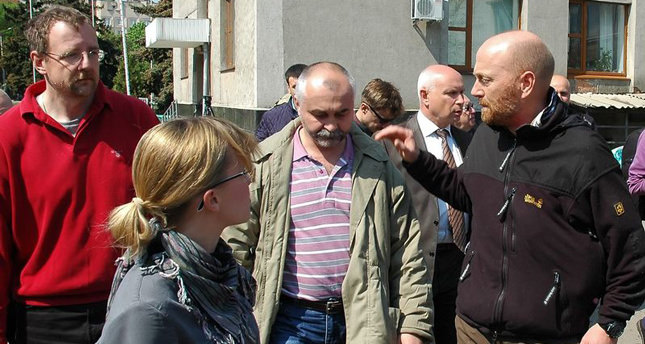 by AA May 03, 2014 12:00 am
SLAVIANSK, Ukraine — A team of international military observers seized by pro-Russia separatists in eastern Ukraine was freed Saturday.

Separatists abducted eight European observers for watchdog Organization for Security and Cooperation in Europe in the flashpoint city of Slaviansk on April 25. They were seized alongside five Ukrainians; one of the observers was later released for medical reasons.

The self-declared mayor of Slaviansk, Vyacheslav Ponomarev, confirmed the release of the remaining 12 members of the OSCE, adding Russian envoy Vladimir Lukin, who arrived in eastern Ukraine on Friday, had helped negotiate their release.

An OSCE delegation waited to collect the observers at a checkpoint on the outskirts of the town, he said, adding there had been no prisoner exchange.

The OSCE also confirmed the release in a tweet.

British Foreign Secretary William Hague welcomed the news in a tweet, adding "all other hostages held by illegal armed groups should be released."